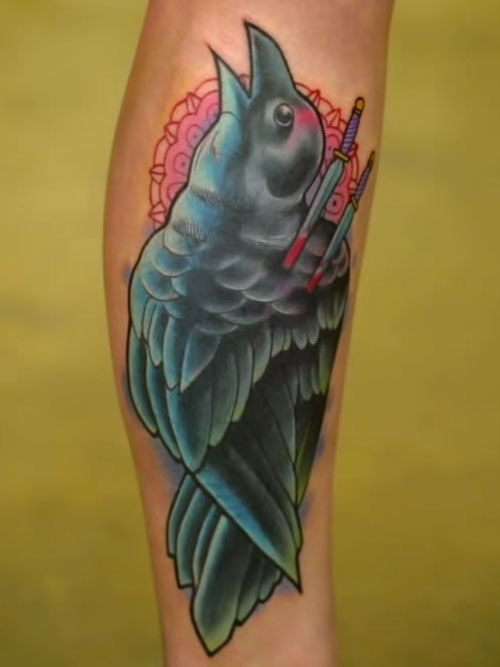 Megan Massacre got the raven tattoo on her leg as part of the TLC TV show America’s Worst Tattoos. It covers up an unfinished zombie tattoo that she hated. She worked collaboratively with artist Tim Pangburn to come up with the new design.

“I like dark creepy things,” she told TLC. “Halloween is one of my favorite holidays and ravens remind me of Halloween. So it was a pretty good fit for me. I was very excited about. I love it so much better than the weird creepy alien zombie that used to be on my leg.” 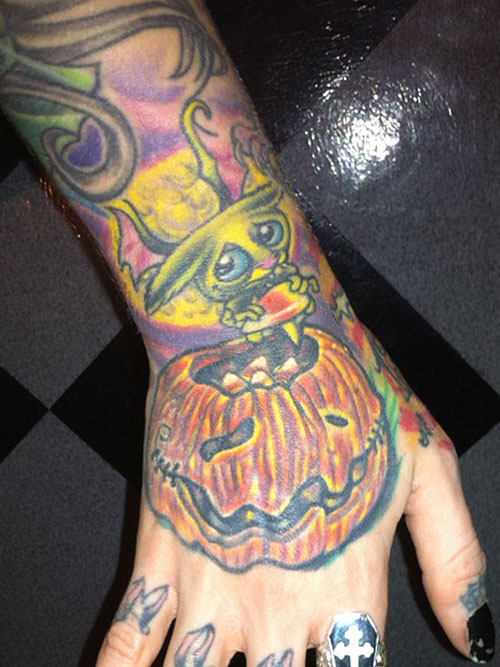 Megan Massacre got this tattoo on the back of her right hand from Art of Gunnar in November 2009. It’s a bat-like creature pulling candy corn out of a jack-o-lantern pumpkin. Megan loves all thing Halloween. 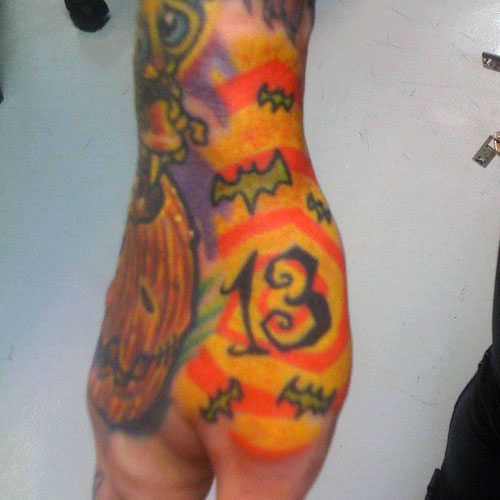 Megan Massacre got this number “13” tattoo on the side of her left hand for Friday the 13th on August 13, 2010. The rest of her hand is Halloween themed with a large jack-o-lantern pumpkin and little green bats. She also has has an orange and yellow spiral background which has mostly faded. 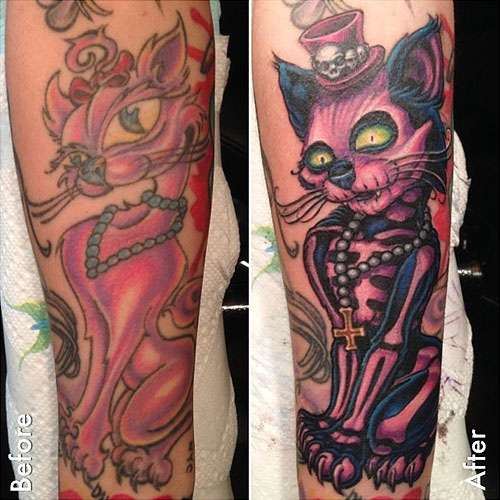 Megan Massacre had a pink cat tattoo on her right forearm which was redone by artist Tim Kern in November 2013. He transformed it into a blue and purple skeleton/demon cat and gave it a skull-trimmed top hat.

She wrote “Even cover up artists need cover ups sometimes haha. I spent my day at @tribulationtattoo yesterday getting this old pink kitty cat I had tattooed on my forearm yearssss ago revamped by the very awesome @ymonster! Thank you so much Tim!!” 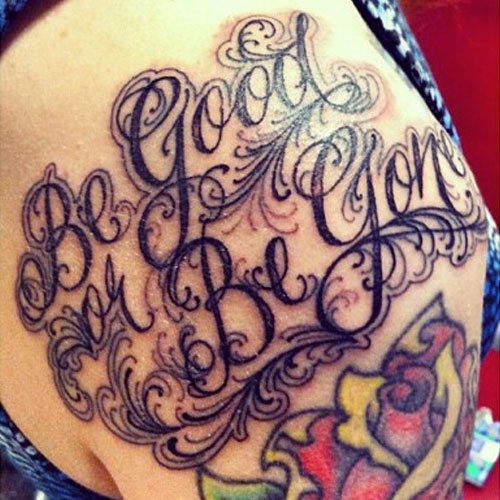 Megan Massacre got this script style writing tattooed on her right shoulder from artist Ross Nagle in August 2012. It says “Be Good or Be Gone.” 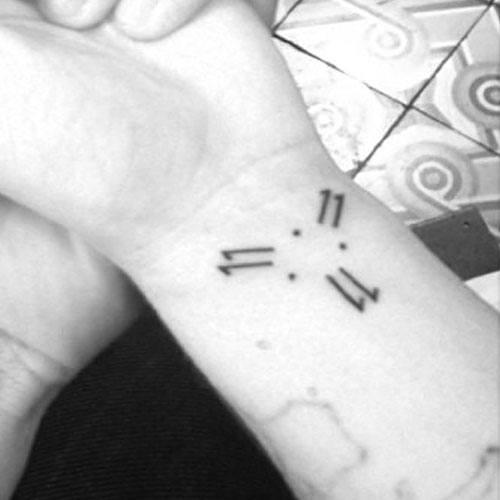 Joe is best known as the drummer of the band Combichrist and he and Megan have their own DJ duo called Letz Massacre. 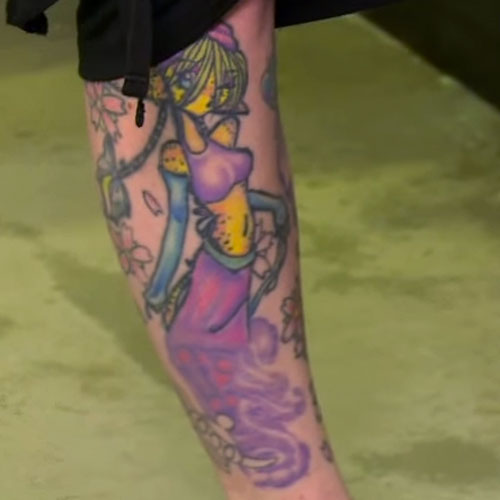 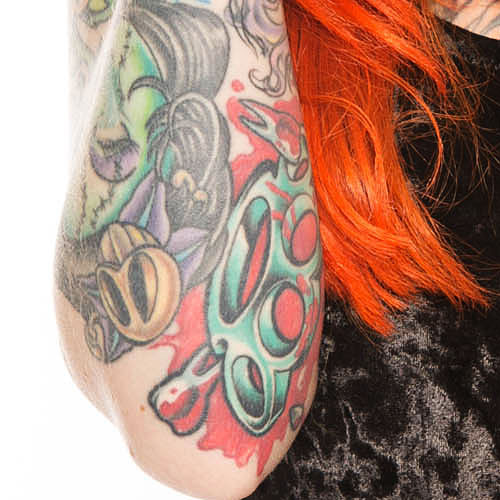 Megan Massacre has a tattoo on her right elbow of brass knuckles in front of a pool of blood, with bloody teeth scattered around it 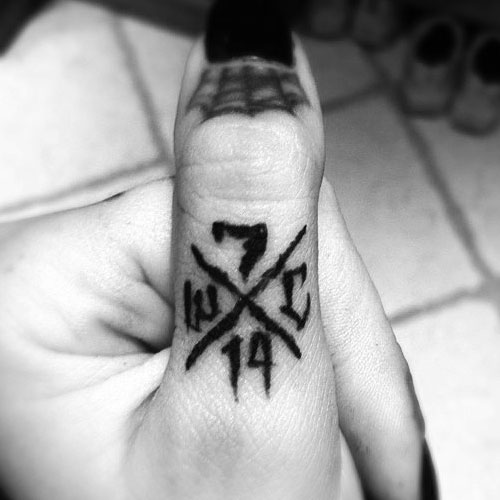 Megan Massacre got this tattoo on her thumb with her friends in the band Motionless In White. She appeared in their music video for “Creatures” and traveled with them on the 2011 Warped Tour. They all got these tattoos together in August 2011. The letters “W C” stand for “Wing Crew”

She told Metal Hammer “I have this little symbol that actually comes from one of my best friends’ band, Motionless In White. They’re from the same place I’m from, so I’m really good friends with those guys. I tattooed all of them, so at the end of the tour, I got them to tattoo me! It looks like crap because none of them now how to tattoo, but I love it!” 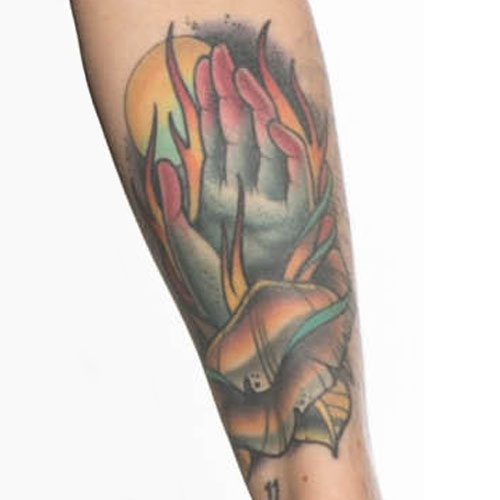