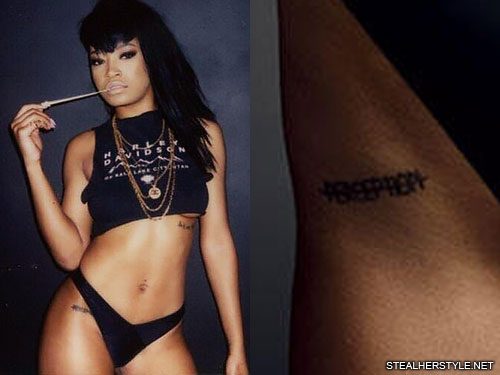 Keke Palmer has a rarely-seen tattoo on her right thigh which says “Perception” with a line through the letters.

END_OF_DOCUMENT_TOKEN_TO_BE_REPLACED 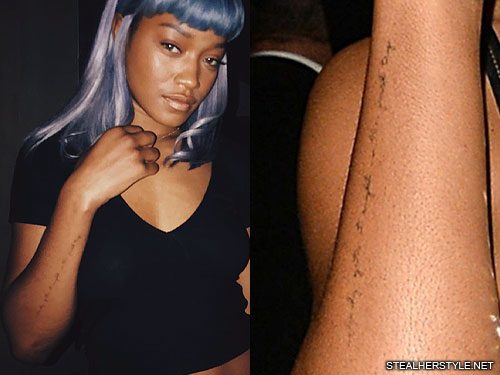 In September 2016, Keke Palmer got writing tattooed along her right forearm is small delicate letters.

END_OF_DOCUMENT_TOKEN_TO_BE_REPLACED 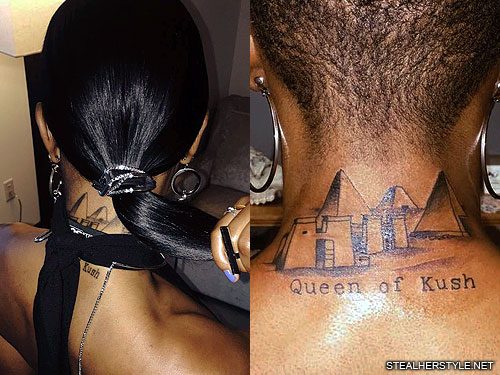 Keke Palmer showed off a new tattoo on the back of her neck in an instagram post in June 2016.  The tattoo of Nubian pyramids and the words “Queen of Kush” represents her African ancestry as well as female empowerment. Keke explained the history of Kush on her instagram:

The Kingdom of Kush or Kush was an ancient African Nubian kingdom situated on the confluences of the Blue Nile, White Nile and River Atbara. (1050/1070 B.C. – 350 A.D.) but at the height of its power in about 700 B.C. the Kingdom of Kush controlled the entirety of Egypt itself with Kushite Pharaohs ruling. What I love most is it’s history’s of female rulers!! In school, we very rarely ever learn about female rules and never about African rulers. Amanirenas was one of the most famous Queens of Kush. She reigned from about 40 B.C.E. to 10 B.C.E. She is one of the most famous kandakes(means queen really but that was the title back then), because of her role leading Kushite armies against the Romans from in a war that lasted five years ? (27 BCE – 22 BCE). She was able to communicate a peace treaty that favoured the Kushites, granting them land and an exemption from future taxation. She has been described as brave, with one eye #MyAncestors P. S. “Egypt” is a Greek word meaning black, hence the rename when they invaded. ???✨? (shoutout to @threekingstattoo in Brooklyn ✍

She has been learning about the ancient history of Africa and wanted to pay tribute to the better chapters of her people’s history, since so much of African-American history is tragic. She told Hot 97:

[I’m] just trying to learn more about myself and learn about the history outside of America, my American history. I want to learn more about my ancestors over in Africa. I don’t want to always think about slavery as the only thing that happened to black folks. We actually have another history that we don’t really hear that much about where we were kings and queens. I want to hear more about that.

The tattoo is often misinterpreted since “kush” is also slang for marijuana. Keke knew this would happen and doesn’t mind because it gives her the opportunity to set people straight and teach them about the history of her people.  She says she wants it to be “a conversation piece” and hopes that people who see her on the street will ask about it.

END_OF_DOCUMENT_TOKEN_TO_BE_REPLACED 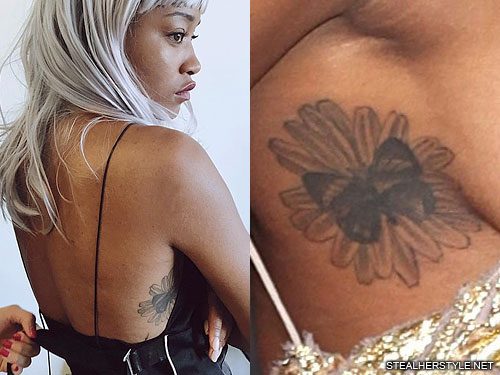 Keke Palmer has a tattoo on the right side of her ribcage of a butterfly on a flower. The butterfly is mostly in black ink while the flower is in lighter shades of gray.

END_OF_DOCUMENT_TOKEN_TO_BE_REPLACED 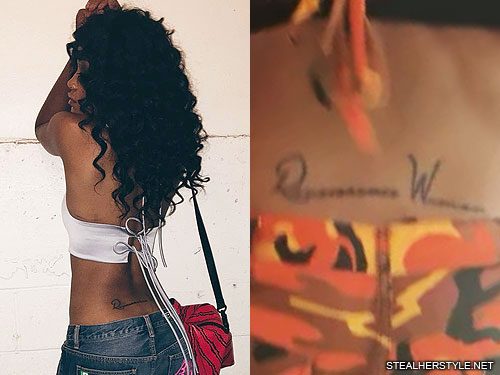 Keke Palmer got a tattoo on her lower back in February 2016 which says “Renaissance Woman” to represent her many talents. She shared a picture of the fresh ink along with the definition of the phrase “1. a woman who has acquired profound knowledge or proficiency in more than one field.” Throughout her career Keke has held many different roles as an actress, singer, dancer, television host, and more.
END_OF_DOCUMENT_TOKEN_TO_BE_REPLACED 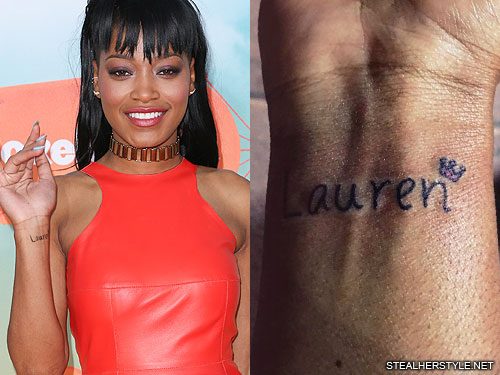 Keke Palmer got her real first name, Lauren, tattooed on her right wrist and she added a little crown next to the name to remind herself that she’s a queen. END_OF_DOCUMENT_TOKEN_TO_BE_REPLACED 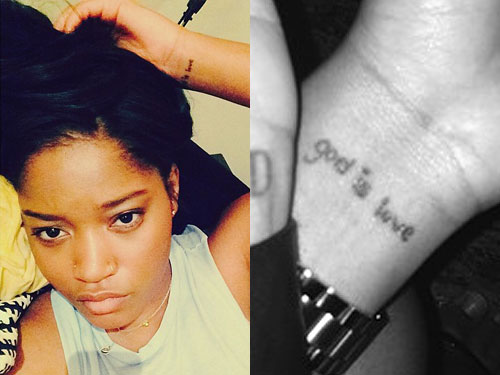 Keke Palmer got this “God is love” tattoo on her wrist in February 2014 while in New Orleans for Mardi Gras. 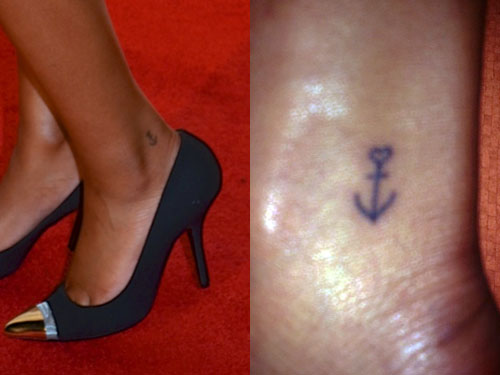 Keke Palmer and her friend Taylor Parks got these anchor tattoos in March 2012. She wrote on instagram “Matching tattoo with my bestie! @officialtaylorp! I love you forever girl, always keeping me grounded.. Always holding me down :)” 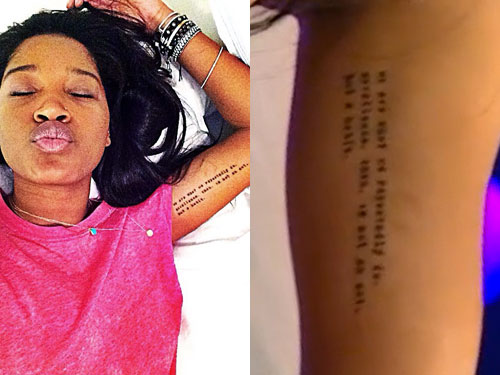 Keke Palmer has a quote from the Greek philosopher Aristotle on the inside of her left upper arm. It says “We are what we repeatedly do. Excellence, then, is not an act but a habit.”

She told EBONY “When I was younger, I would always go to this website called thinkexist.com whenever I was feeling stressed or happy or felt like expressing myself. I would go get a quote that was surrounded by those specific ideas or subject. So one day I put in something like ‘strength’ and I came across the quote ‘We are what we repeatedly do, excellence, then, is not an act but a habit.’ And I loved it so much that I ended up getting it tattooed.” 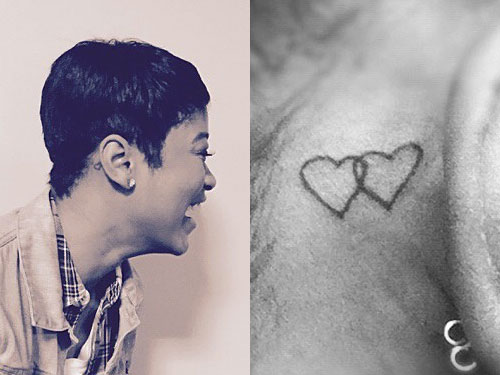