Cheryl Cole has had at least 8 known tattoos: 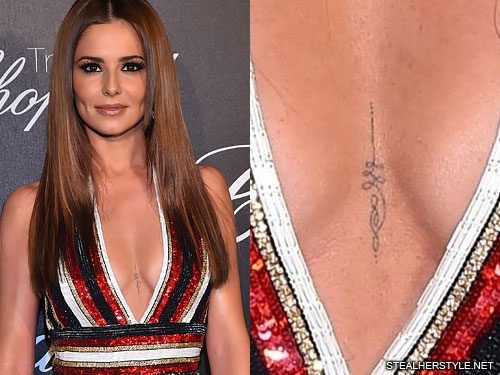 Cheryl Cole got this little swirl tattoo on the center of her chest from artist Nikko Hurtado in April 2016. The design is a Buddhist unalome which represents enlightenment. If the top of the tattoo symbolizes the destination, the swirls symbolize the journey — which is often indirect but gets more refined as you get closer to the goal. It shows that you are making progress even when it feels like you’re treading backwards.

The artist wrote on instagram: “Always honored to tattoo my friend @cherylofficial did this little Buddhist symbol on her chest about a month ago. @cherylofficial & @fakeliampayne are class acts and always treat me very well. Thank you guys for trusting me tattooing you. ?? honored.”

END_OF_DOCUMENT_TOKEN_TO_BE_REPLACED 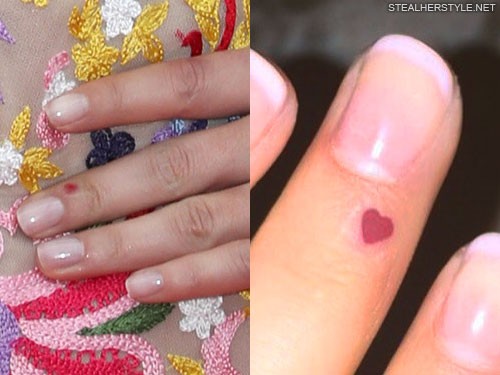 Cheryl has a small red heart tattoo just below the base of her nail bed on her left middle finger. She had previously said that she was done with tattoos after huge butt tattoo, but I guess she made an exception for something so tiny! 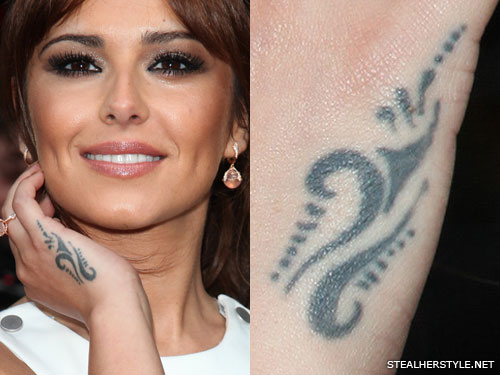 Cheryl Cole has tribal tattoo on her right hand in a traditional Polynesian Maori style.  Though she has said that her favorite tattoo “changes daily,” she mentioned this one as a favorite in a 2010 interview with The Guardian. “I like the one on my hand, the little one.  Just an abstract thing.”

END_OF_DOCUMENT_TOKEN_TO_BE_REPLACED 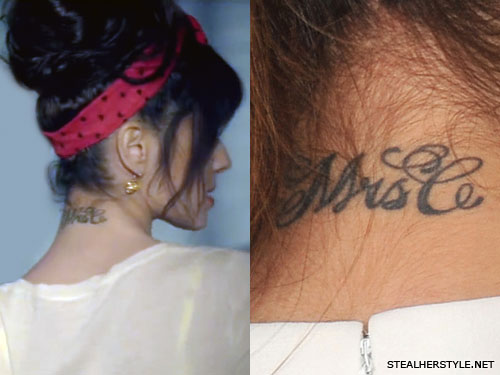 Cheryl, who’s maiden name is Cheryl Tweedy, got this “Mrs C” tattoo on the back of her neck after getting married to football player Ashley Cole in 2006 and changing her last name to Cole. Unfortunately the couple were divorced in 2010. She told The Guardian that she does not plan to remove this tattoo, saying “I’m not ashamed of anything. I’ve got nothing to rub away.”

She did not immediately change her name either, adding “I don’t feel sentimental about the name. If I went back to being Cheryl Tweedy, I’d be… I’m not ashamed of my marriage, it’s a period in my life. And I am Cheryl Cole. That’s how I feel.” However she took on the name Cheryl Fernandez-Versini after marrying Jean-Bernard Fernandez-Versini in July 2014. 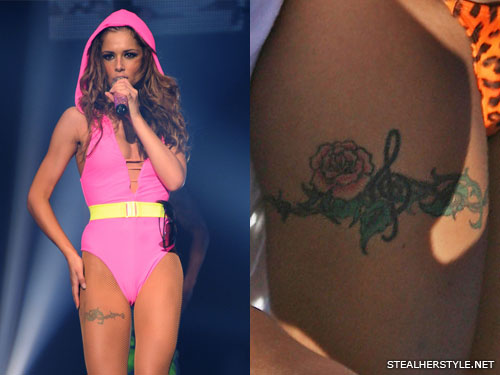 Cheryl has a tattoo of vines and barbed wire wrapping around her right thigh with a rose and a treble clef at the side.  Roses are her favorite flower and the treble clef represents her music career.

END_OF_DOCUMENT_TOKEN_TO_BE_REPLACED 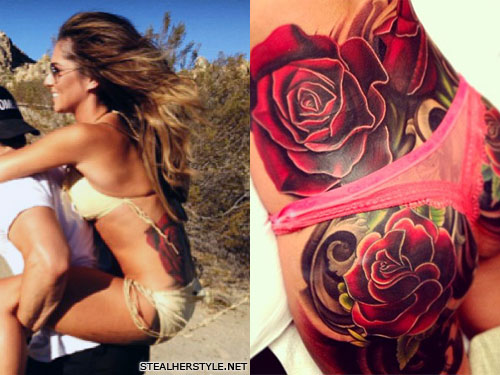 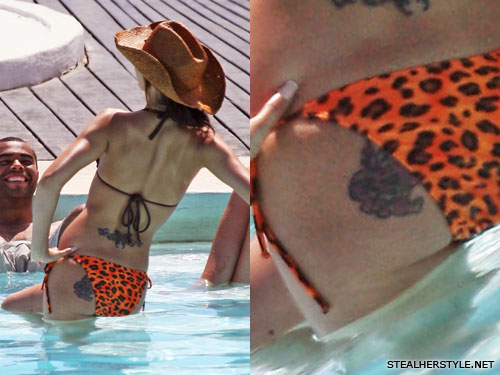 Cheryl Cole has liked the idea of having a rose tattoo on her butt for a long time. She got a small flower tattoo on her left butt cheek in 2007, six years before she took the plunge with the massive cover-up. 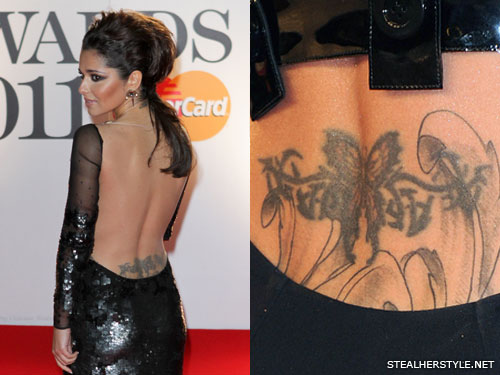 The now-covered tribal butterfly tattoo on Cheryl’s lower back was her oldest tattoo, dating back to at least 2002.  In the above photos, taken in 2011, she had already begun work on the swirling design that now covers her lower back.

Cheryl added this portion of the new design in an eleven-hour session in August 2011 at Shamrock Social Club in Los Angeles. The tattoo represents a fresh start after her 2010 divorce. “I designed it myself with the help of an artist and had it done to symbolise a new beginning,” she said.

According to The Mirror, Cheryl told a friend “The tattoo is deeply personal. It took weeks to come up with the final design. It has a strong symbolic meaning and signifies a fresh start and my new independence.”