Beyoncé has had at least 4 known tattoos: 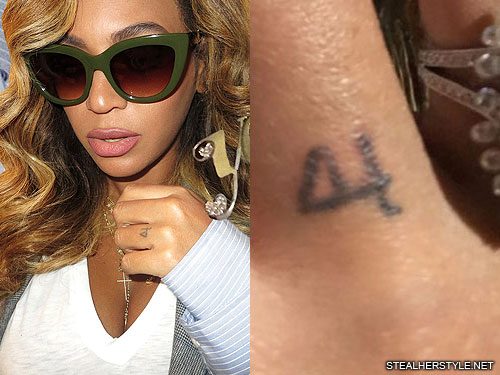 Beyoncé altered her “IV” finger tattoo in August 2016. She covered the previously red tattoo with black ink and changed the design slightly. It now looks like a combination of a number 4 and a letter “J” for Jay-Z. Beyoncé and her husband Jay-Z originally got the matching “IV” tattoos to commemorate their 2008 wedding. Four is their lucky number and they chose April 4th (4/4) as their wedding date.

Beyonce’s old tattoo had started to look very faded, which was most likely just natural wear-and-tear. However the lighter appearance of the tattoo lead to lots of speculation that she was having it removed and their marriage was failing. Beyonce and Jay-Z are now in a great place in their relationship. If both of their lyrics are to be believed, they’ve moved on past his infidelity. With this tattoo Beyonce is showing the world that their marriage is stronger than ever.

END_OF_DOCUMENT_TOKEN_TO_BE_REPLACED 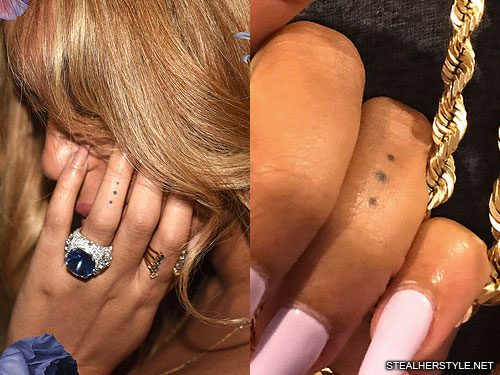 Beyoncé has a tattoo of three little dots on her left ring finger which represent her three children. The color difference is subtle, but the middle dot is in blue ink because it symbolizes she and Jay-Z’s first child Blue Ivy Carter who was born on January 7, 2012. The top and bottom black dots represent their twins Sir and Rumi Carter, who were born on June 13, 2017.

She actually got the tattoo before giving birth, which was a risky move. She and husband Jay-Z were thrilled to have the pregnancy so far along especially since she has miscarried in the past, an experience that she describes as “the saddest thing I’ve ever been through.” But on the positive side, she says that “The pain and trauma from that just makes it mean so much more to get an opportunity to bring life into the world.” And fortunately this time they got not one but two beautiful babies!

After removing the tattoo on her hip, she told People magazine that she wouldn’t get another tattoo unless it was for something permanent like children. This tattoo doesn’t seem like something that she has to worry about regretting — but she might need to add to it if she ever grows her family.
END_OF_DOCUMENT_TOKEN_TO_BE_REPLACED 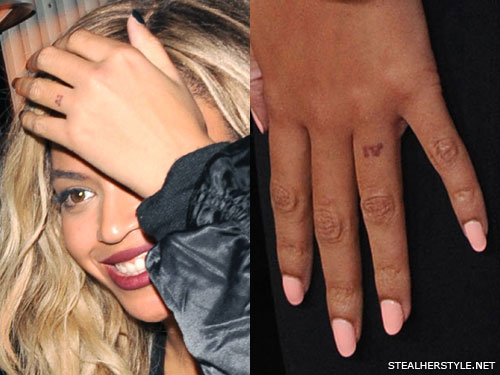 Beyoncé Knowles has an “IV” tattoo on her left ring finger which is a matching tattoo with her husband Jay-Z. The tattoo has many meanings for the couple.

IV is the Roman Numeral for the number four. Both Beyoncé and Jay-Z have birthdays on the fourth of the month: she was born on September 4, 1981 and he was born on December 4, 1969. The couple were married on April 4, 2008. Additionally Beyoncé’s mother has a birthday on January 4th.

Beyoncé generally does not wear her $5 million engagement ring, even though she describes it as her favorite piece of jewelry. “I feel like [the ring] is for me when I’m not working. And when I’m working, it’s too personal,” she said in an interview. “Even though it’s fading I have a little tattoo that is here always, because I know I would be working and I wouldn’t be able to wear it all the time. So I have this.”

END_OF_DOCUMENT_TOKEN_TO_BE_REPLACED 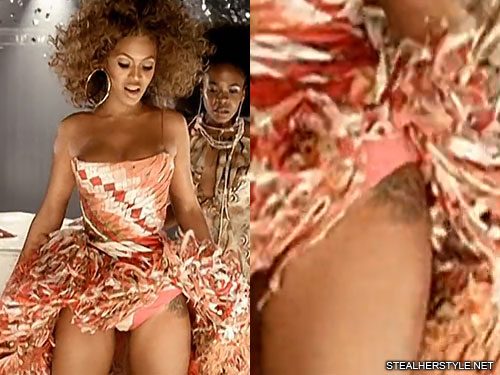 Beyoncé’s first tattoo was a mistake that she removed soon after. She still has scars on her left hip from the laser removal. The tattoo was rarely seen due to it’s location, but we know a lot about it from interviews with her tattoo artist and Queen Bey herself.

The removed tattoo was an angel in prayer on her left hip. She visited the studio of Mister Cartoon who has inked many of hip-hop’s biggest stars. She didn’t know what she wanted to get and after a long discussion they came up with the design together. The artist told the LA Times that Beyoncé was his hardest client to design for since he needed to create something fitting of a young diva who had never been inked before. Ultimately it seems like the size of the tattoo was too much for Beyoncé. She’s gotten more tattoos since, but they’ve been very small and very personal.

Beyoncé opened up about the tattoo — and it’s removal — in a 2010 interview with People magazine:

When I was 21, I actually did get a tattoo of an angel that I had painted. It was very, very beautiful. But the next day I woke up, and I was like, “Oh my God! What did I do?” So literally the next week, I started getting it removed. It’s gone now. I went through so many years of pain. I wish I’d taped it for young people to see.

She also sang about her family’s reaction to the tattoo on her song “Daddy” from her 2003 album Dangerously in Love: