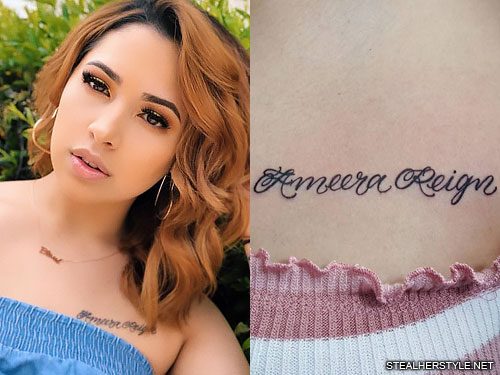 Jasmine Villegas and her former fiancé Ronnie Banks celebrated Valentine’s Day on February 14, 2018 by getting matching tattoos of their daughter’s name “Ameera Reign.” The date is also significant because Ameera’s first birthday was only a few days later on February 19th.

Ronnie and Jasmine have a YouTube channel called BANKS Family where they have shared the ups and downs of their relationship as well as posting funny pranks and reaction videos. Naturally they filmed their whole tattoo experience.

Jasmine has much bigger tattoos than this, so we’re surprised that she seemed so scared!  “It’s such a small thing but I’m terrified,” she revealed.  Despite her fears, she was also excited. “This tattoo is probably the only tattoo that’s ever going to mean anything to me because it’s my daughter’s name. So I can’t wait.”  She used numbing cream to dull the pain and persevered.

She got the collarbone inking from artist Kim at Inkies Tattoo Studio in Fremont, CA. Ronnie wished he could put his tattoo on the left side of his chest like Jasmine’s, be he opted to place it on the opposite side instead because he had more open space between his many other inkings.

A few months after getting the tattoos Jasmine and Ronnie announced that they are taking a break after four years together.  But of course they are still dedicated to co-parenting Ameera.

END_OF_DOCUMENT_TOKEN_TO_BE_REPLACED 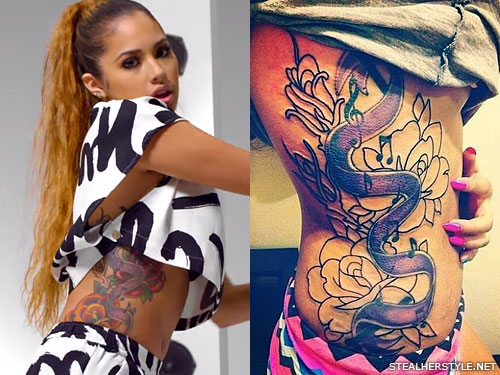 Jasmine Villegas has a huge tattoo covering her right side. It has seen many iterations and been worked on by multiple artists. She initially started with a cluster of music notes which together formed a harmony. In October 2012 artist MeNaCe added a large ribbon banner weaving through the notes, but Jasmine wasn’t happy with it.

“I didn’t really like the scroll too much, how it made my side look,” she explained in an interview. “So to cover something big you kinda gotta go a little bigger! So I put big colorful roses on my side.” Artist Romeo Lacoste added the flowers. Rather than totally covering the music notes and scroll, he incorporated them into the final design and filled in the ribbon with purple ink.

After all of the alternations Jasmine tweeted “Not gonna lie…I wish I would’ve thought my side tattoo through more. dad you were right !! #dadsknowbest” 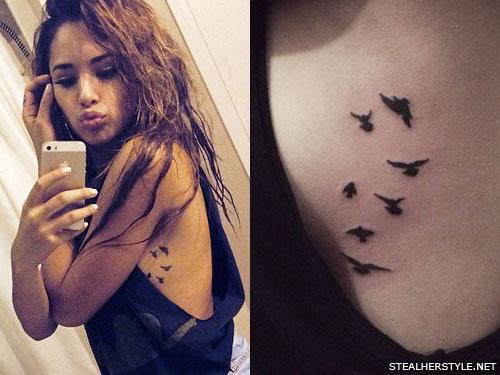 Jasmine Villegas has a flock of doves on her left side which she got from MeNaCe in March 2013. The tattoo is just something that she wanted and it does not have any special meaning.

Jasmine put her two bigger tattoos on her sides so that she can cover them with clothing when she wants to. She told Wild 94.9 “Since I’m an artist…I wanted to pick spots that weren’t noticeable.”

Flock of Birds MeNaCe Side Silhouette 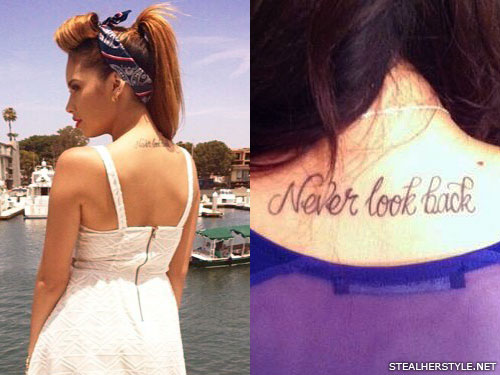 Jasmine’s first tattoo was the words “Never Look Back” on her upper back, which she got in May 2012. She told Power 98.3 “that actually was because I went through a domestic violence relationship for over a year. When I turned 18 I wanted my very first tattoo to mean something and I wanted it to be a positive message. So I got ‘never look back’ basically saying — well I can never physically look back it at it — but just so I would never look back at the past and I would keep moving forward.”

Jasmine has been an advocate against abusive relationships and even released a single “Didn’t Mean It” sharing her own experiences. The intro the the music video reads: “Everybody has a story. This is part of my story and it has made me who I am. Never feel embarrassed or ashamed of any trials you’ve endured. Grow from it and Never Look Back. You are not alone.”

END_OF_DOCUMENT_TOKEN_TO_BE_REPLACED 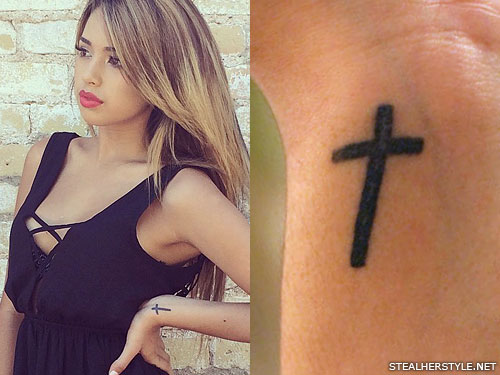 In August 2012 Jasmine Villegas and her friend Briana Jean got matching cross tattoos on their wrists from artist Diana Munoz. A third pal Rob Swanson already has a similar solid black cross on his hand.

Like Lady Gaga she has defended her “upside-down” tattoo placement, saying that the tattoo is meant to be seen by herself. 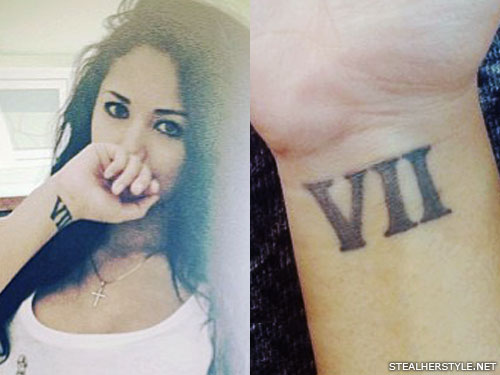 The “VII” tattoo on Jasmine Villegas’ wrist is the Roman numeral number 7 for her birthday — December 7, 1993. 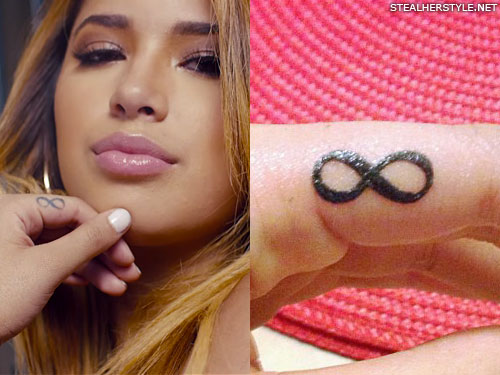 Jasmine Villegas got an infinity symbol on the side of her index finger from artist MeNaCe in September 2013. Her then-boyfriend Shaun Frakes got a matching, but much larger, infinity sign on his elbow. Though the tattoos imply that they would last forever, they unfortunately broke up a few months later.