Maren Morris got this roman numeral tattoo the back of her left arm to celebrate the success of her single “I Could Use A Love Song.” It was her first solo number one on the Billboard Country Airplay chart, having previously topped the chart with her feature on Thomas Rhett’s “Craving You.”

More importantly, “I Could Use a Love Song” was nominated for Best Country Solo Performance at the 2018 Grammy Awards. She decided that she would honor the achievement and the song during her trip to attend the Grammy Awards ceremony. “Oh, and a ICUALS tattoo is definitely happening when I’m in NYC for Grammys. #SorryDad,” she tweeted.

She showed off her fresh ink on the red carpet at the Clive Davis Pre-Grammy Gala on January 27, 2018, telling Billboard:

It’s been an amazing month. I can’t believe — It went number one, and then we’re at the Grammys this weekend….Watching it inch up the chart all week, and then they finally said it went number one and I could just exhale, finally. It was really exciting. I actually got a tattoo today to signify the number of weeks it was on the chart. So it’s 42. It’s the first number one so I want to celebrate it.

“I Could Use A Love Song” was released on March 27, 2017 as the third single for debut album Hero. The sleeper hit climbed the chart slowly after debuting at number 56. It finally hit number one on the chart dated January 20, 2018 after 42 long weeks. Maren’s tattoo says “XLII” which is the roman numeral for 42. 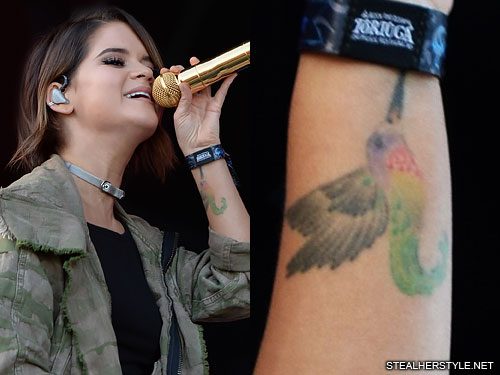 Maren Morris has a tattoo of a watercolor-style hummingbird on the inside of her left forearm.  She loves hummingbirds, but it is symbolic of her music career as well.  She explained to Country Note:

This is my first tattoo.  It’s a hummingbird.  My first ever guitar was a Gibson Hummingbird.  And I just love them.  That was when I was 18.

Based on an interview with Huffington Post, it seems like the Gibson Hummingbird was actually her third guitar.  She got a cheap Ibanez acoustic guitar from her dad when she was 12, which she loaned to a neighbor and never saw again; and Martin acoustic guitar which she still has.  The Gibson Hummingbird was an 18th birthday present from her parents.

Regardless, the Gibson Hummingbird is the one that’s special to her.  We love that she found a creative an beautiful way to represent it with this hummingbird design rather than getting a picture of the guitar itself.

END_OF_DOCUMENT_TOKEN_TO_BE_REPLACED 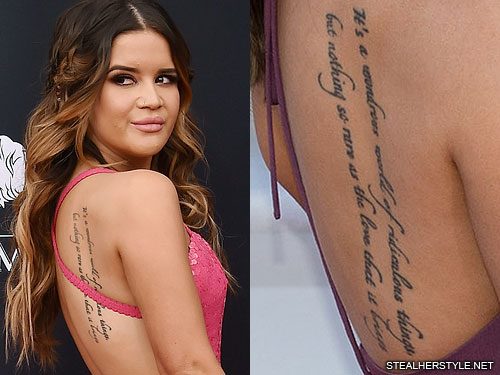 Maren Morris’ back tattoo says “It’s a wondrous world of ridiculous things / but nothing so rare as the love that it brings”  which is a line from the song “Christina” by folk singer-songwriter Patty Griffin.  There’s actually a tiny error in the tattoo since the second line should start “with” instead of “but.”

She got this tattoo in April 2013 after putting a lot of thought into planning it.  She shared a photo on instagram back in August 2012 where she edited the lyrics onto her back in two different fonts, trying to decide which she liked better.

Patty Griffin is one of her influences and musical idols.  “Going to see Patty Griffin at the Ryman this evening. I may never come back down,” she tweeted before seeing her in concert in October 2013.

END_OF_DOCUMENT_TOKEN_TO_BE_REPLACED 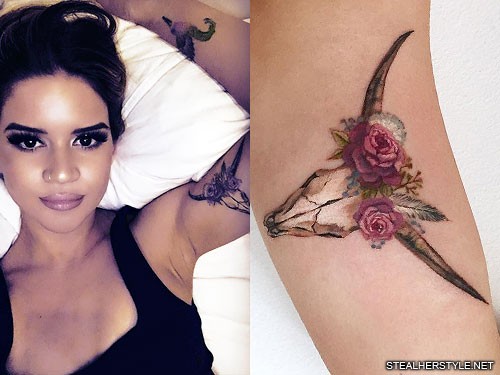 Maren Morris got this beautiful watercolor-style bull skull tattoo from artist Amanda Wachob in July 2016. She chose a longhorn bull to represent her Texan heritage and added flowers to show her feminine side.  She explained on instagram how this tattoo represents the different aspects of her personality: “Little bit Texan sass, little bit feminine. Thanks, @amandawachob ! Love your talent. Have followed her work for almost 6 years! ???” END_OF_DOCUMENT_TOKEN_TO_BE_REPLACED