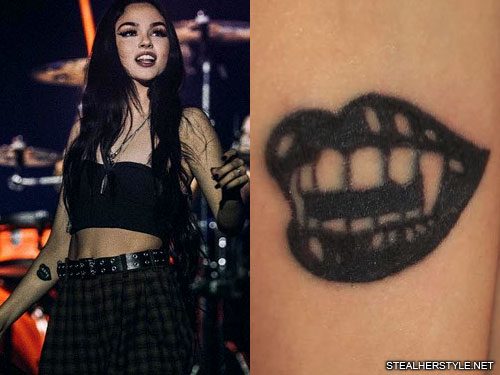 Maggie Lindemann had been planning this fangs tattoo for a long time before getting it done in March 2018.  The vampire-loving singer got some more discrete tattoos like “Bite Me” on her finger and a bat on her ankle first before taking the plunge because she didn’t want to get a large piece while she’s still so young.  But by March 2018 she was finally ready to get the tattoo that she really wanted.  She and her friend Chris Miles got matching tattoos on their forearms of an open mouth showing its teeth and fangs.  Artist Sick Boy used a blackwork technique to create the goth-style design using solid black ink.  Maggie is definitely having a goth moment with her clothing, but she’s sure that the tattoo will be something that stays relevant as she continues to evolve:

“I’ve wanted a vampire tattoo since I was 11.  Wanted this specific tattoo since 2016.  Just because my style changes doesn’t mean who I truly am on the inside or the things I’ve always liked change.”

END_OF_DOCUMENT_TOKEN_TO_BE_REPLACED 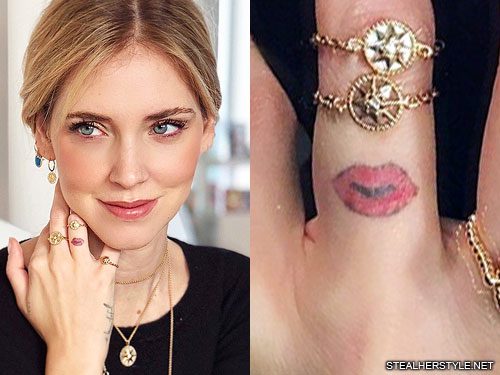 In November 2014 Chiara Ferragni added a tattoo of red lips on her right ring finger to match the eye tattoo which she already had on her opposite hand.  She has used both eyes and lips in her designs for the Chiara Ferragni collection but the eyes seem to be more popular with customers and are much more common in her recent collections than the red lips are.

END_OF_DOCUMENT_TOKEN_TO_BE_REPLACED 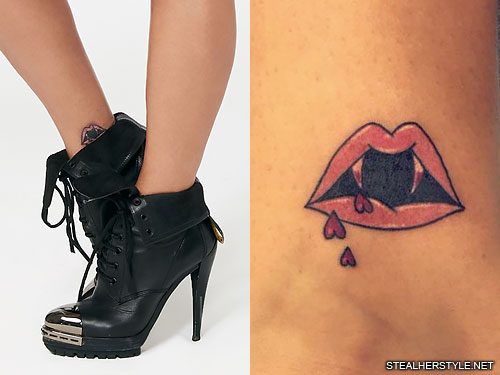 Kirstin Maldonado has a vampire-inspired tattoo on the inside of her right ankle. It’s a mouth with vampire fangs and little upside hearts instead of drops of blood.

She got this tattoo as a Friday the 13th special on October 13, 2017 from artist Romeo Lacoste.

END_OF_DOCUMENT_TOKEN_TO_BE_REPLACED 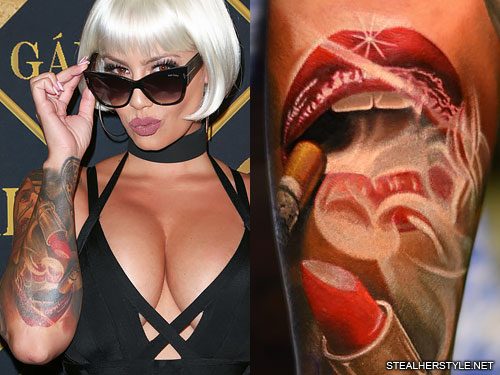 Amber Rose got a tattoo on her right forearm in December 2015 of an open mouth blowing smoke and biting a cigarette. It blends in with the lipstick tattoo that she got from the same artist in a previous session.

END_OF_DOCUMENT_TOKEN_TO_BE_REPLACED 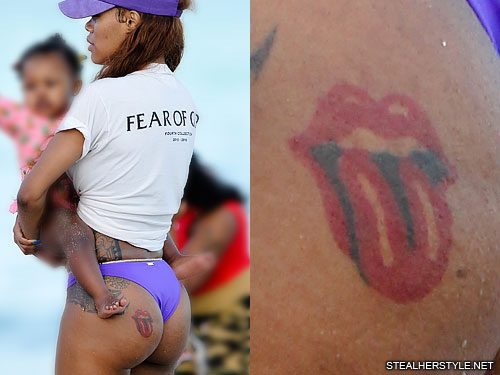 Teyana Taylor has rock band The Rolling Stones’ iconic tongue and lips logo tattooed on the left side of her butt. 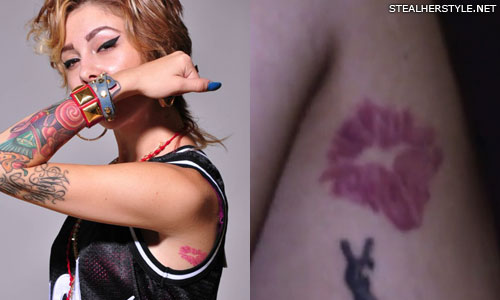 On Lil Debbie’s right side is a pink kiss mark. 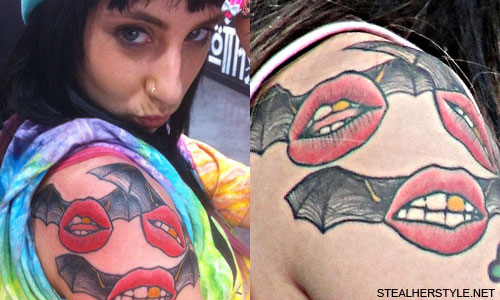 Kreayshawn had the flying lips tattoo on her right shoulder filled in with the lips colored red and the bat wings shaded black. In each mouth is one gold tooth. 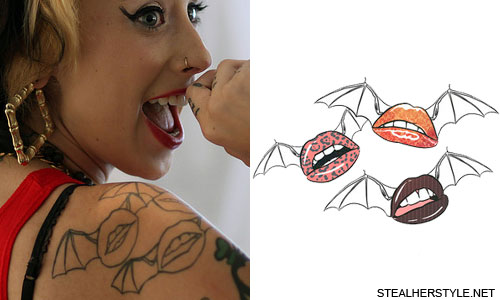 On Kreayshawn’s right shoulder are three flying mouths with bat wings. The tattoo was just an outline when Kreayshawn rose to fame and it stayed uncolored for quite a while, but she eventually had it filled in. 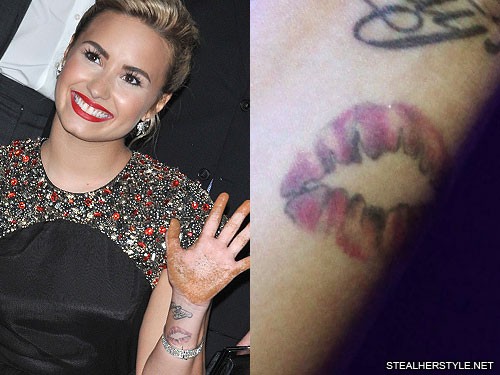 Demi Lovato has a tattoo of red lips on left wrist which she got in July 2011 as a matching tattoo with friends Hanna Beth Merjos, Ivey Ensley and Lauren Pietra. Ivey and Hanna Beth had the kiss placed on their collarbones. The tattoo is of Ivey’s lips.

This playful tattoo stands in contrast to some of Demi’s other ink with much more serious meanings. She told Hollywood Life “I got like a kiss mark, and it’s just like a friendship tattoo and also it kinda reminds me not to take myself too seriously. I got like a fun tattoo rather than all these other ones that are so serious.”

You would have thought that having her feather ear tattoo turn out poorly would have taught Demi a lesson about getting tattoos in non-professional environments, but apparently it did not. She told MTV “It was also on Warped Tour. In a tour bus. Another one, different year,” while grimacing. In another interview, she said “It was just a spur of the moment stupid decision.”

Demi Lovato has come to hate this tattoo and joked that it looks like a vagina. Those comments upset tattoo artist Ashley McMullen, who claimed that Demi was drunk and rude when she got the tattoo, didn’t pay for it, and didn’t give Ashley any publicity. She put the blame for the bad tattoo on Demi, saying she gave Demi what she “specifically asked for…it is not my fault you wanted a pair of red lips on your wrist next to your upside down tattoo.”

She finally had the tattoo covered with a rose in April 2015. END_OF_DOCUMENT_TOKEN_TO_BE_REPLACED 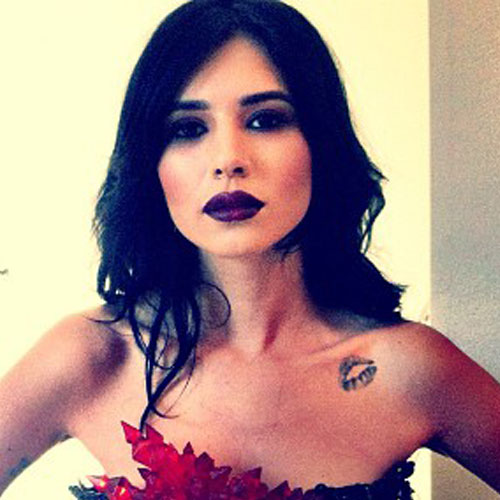 Hanna Beth Merjos and a group of three friends — Demi Lovato, Ivey Ensley, and Lauren Pietra — all got matching tattoos of a kiss mark at Warped Tour in July 2011. Hanna Beth’s is on the left side of her chest just below the collarbone while Demi’s is on her wrist. Lips are the logo of Hanna Beth’s “Sober Is Sexy” clothing line.