Lexus Amanda has a full sleeve on her right arm and a half sleeve on her left arm. She also has two large tattoos on her back and tattoos on both hands. Lexus, whose real name is Alexis Amanda Joyce, sings in the band Blacklisted Me. 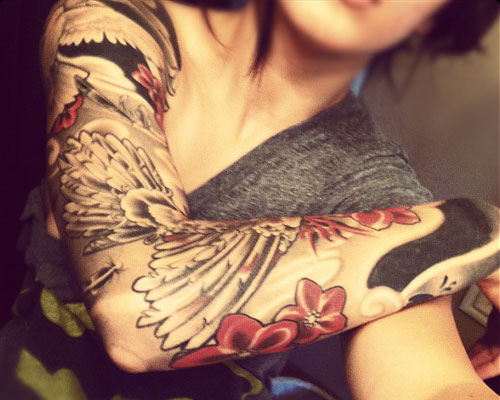 Her right arm is a full sleeve tattoo with birds, flowers, and swirls. On her shoulder are two flying doves and inside her elbow is a dead dove with splashes of blood. The sleeve is done entirely in black white and red.

The tattoo was planned and executed as one piece. Lexus started with an outline on her whole arm and then had it filled in bit by bit, as a piece this large takes many sessions to complete. Keep scrolling for loads of close-up pictures. 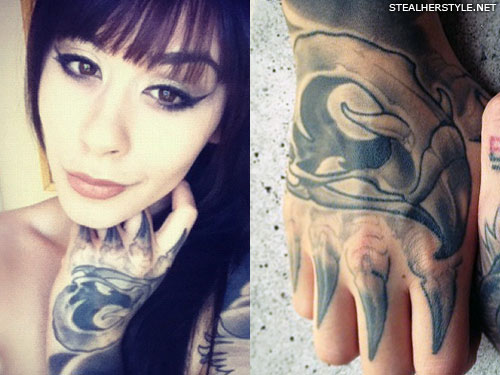 In December 2011, Lexus extended her sleeve onto the back of her right hand with a bird skull and claws on her knuckles. 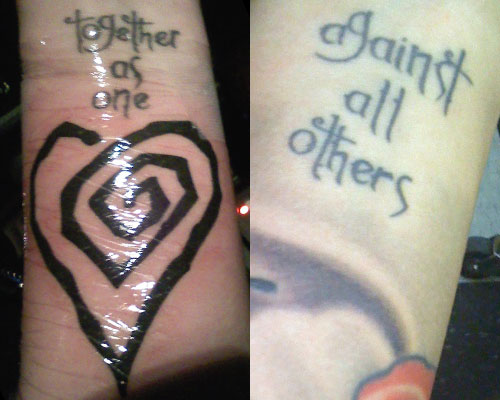 Lexus has two Marilyn Manson tattoos on her wrists. In her left wrist is the heart-shaped spiral logo which comes from the artwork of his 2007 album Eat Me, Drink Me. Marilyn Manson has this same logo tattooed on his left wrist.

“In high school I used to draw that heart on my wrist every day with ink pen. When I was 16 years old I always said that I would get it tattooed on me after I turned 18 and I did,” Lexus says. “As much as my musical tastes may change in the future, and as much as my physical appearance and everything changes, I don’t think that I’ll ever regret any of these tattoos because they all represented a time in my life that was important to me.”

Lexus has “together as one” inside her left wrist and “against all others” on her right wrist. These phrases come from Marilyn Manson’s “Heart-Shaped Glasses” music video. 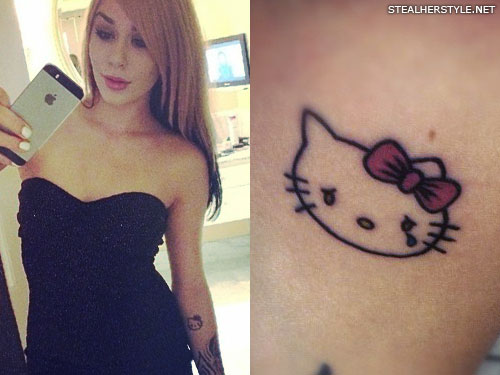 In August 2012 Lexus got a tattoo of Hello Kitty on her left forearm as a BFF tattoo with her friend Laney Chantal. 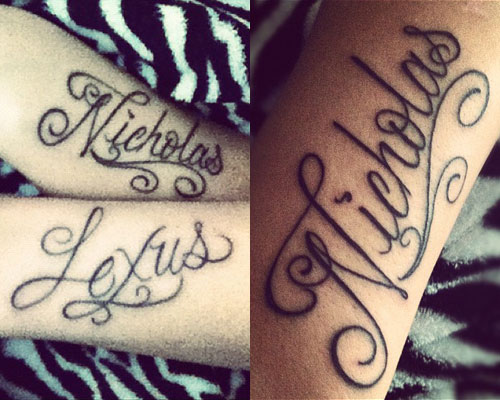 Lexus and her then-husband Nicholas Matthews got tattoos of each others first names on their arms in October 2012. Nick already had the name of his ex-wife on his leg (awkward!), and Lexus took a tattoo gun and scribbled over it. Unfortunately Lexus and Nick split shortly after getting the tattoos, and Lexus had hers covered up. 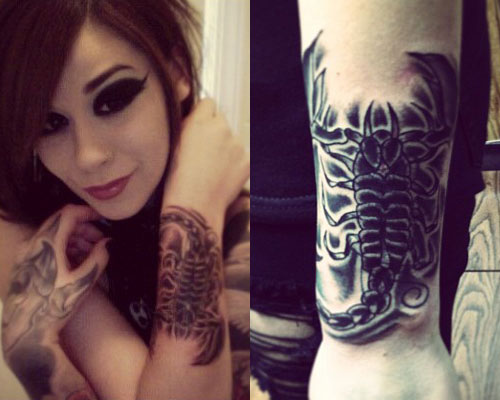 Lexus Amanda got a black scorpion tattooed on her left forearm in February 2013 to cover up where Nicholas’ name had been. It looks like a very effective cover-up as the only visible part of the old tattoo is a little swirl next to the scorpion’s tail. 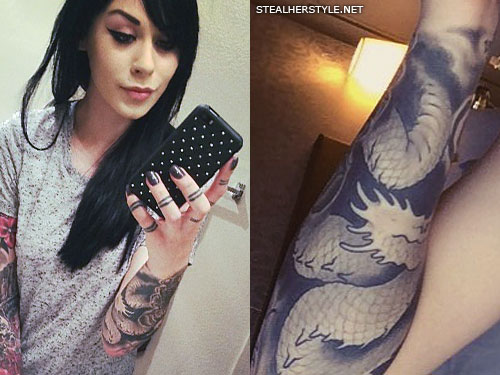 In November 2013, Lexus tattooed a huge Chinese dragon on left forearm. It weaves around her existing tattoos, giving her a half sleeve. Only her Hello Kitty tattoo was covered. 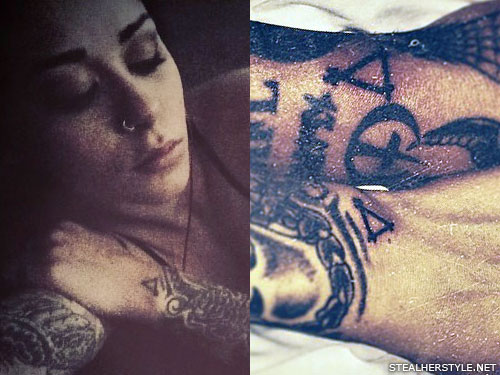 Lexus Amanda and her then-boyfriend Dave Navarro got matching tattoos on the backs of their wrists in May 2014 after participating in a suspension together. Lexus had her back temporarily pierced with two triangular hooks which were used to lift her up. The triangle shape of the tattoo represents the hooks.

Dave is best known as the guitarist of Jane’s Addiction. He also hosts the reality TV tattoo competition Ink Master. 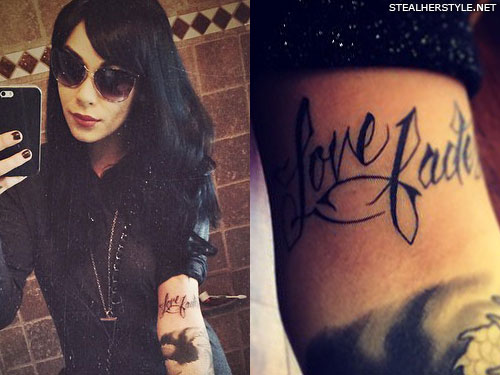 Lexus Amanda got a tattoo on her elbow of the words “Love fades” in October 2014. 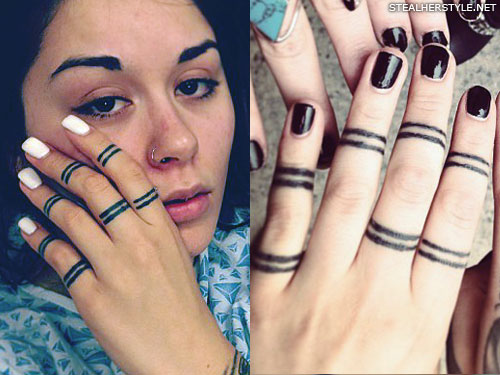 In March 2013, Lexus tattooed black bands around the knuckles on her left hand. There are two stripes on each knuckle except for on her ring finger. 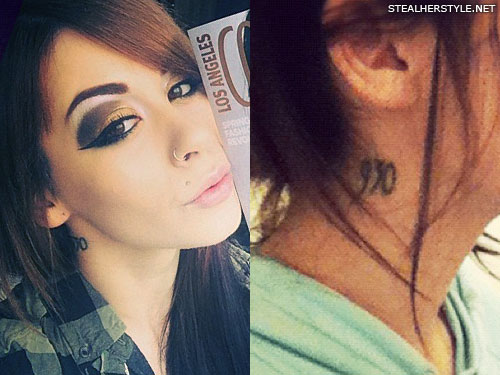 On the right side of her neck is the number “930,” which is a matching tattoo with Matt Good of From First To Last and D.R.U.G.S. 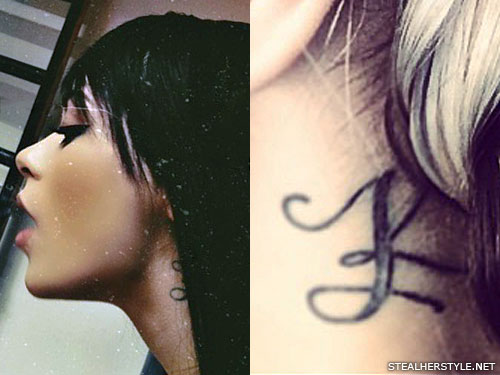 Lexus Amanda has this symbol on the left side of her neck. 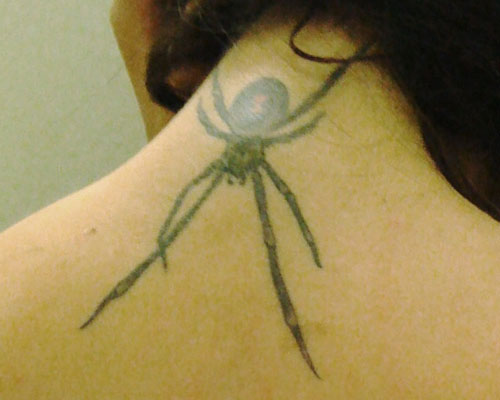 On the back of her neck, Lexus has a black widow spider.  This was her second tattoo and it’s her favorite.  “The reason it means so much to me is because my mom has the same tattoo. I got it after she got it. To me it is a reminder of her and my love for my mom and the relationship that we have,” she explains. 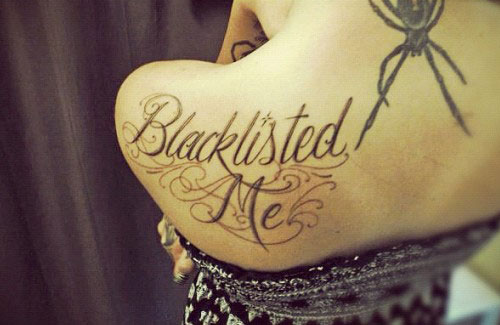 Lexus had the name of her musical project “Blacklisted Me” tattooed on her left shoulder blade in July 2012. Lexus got the tattoo just after announcing the signing of the band to Five Seven Records, so it seems that it may have been a celebratory tattoo.

Blacklisted Me is currently a solo project, though Lexus has had many bandmates in a relatively short amount of time. After a short stint with Scout Taylor-Compton in the band Rose Red, who never released any songs, Lexus formed her own band White widoW as a duet with Tracey Fairaway. Tracey was replaced with Samie Jayden Hirtz, and a few months later the name was changed to Blacklisted Me. Blacklisted Me then became a solo project. Blacklisted Me changed to a duo with Nicholas Matthews, who had formerly fronted Get Scared, while the two were in a relationship but it returned to a solo project after they broke up. That’s a lot of band changing! 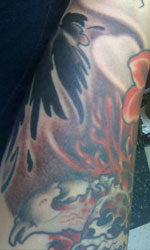 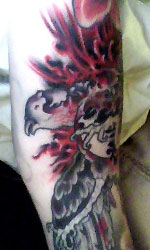 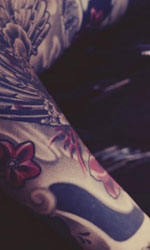 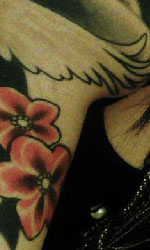 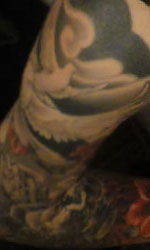 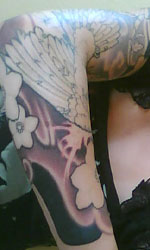 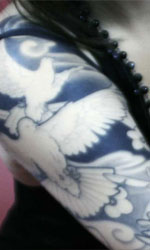 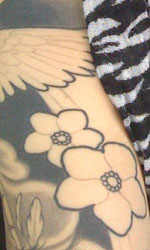 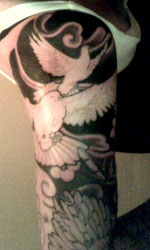 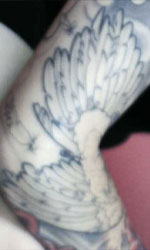 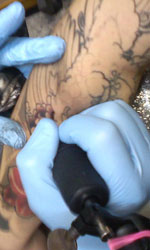 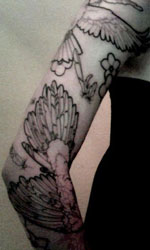