Pop superstar Lady Gaga has fourteen tattoos including flowers on her hip, a German quote on her arm, and a unicorn on her thigh.

All of her tattoos are on one side of her body body out of respect for her father. Gaga says: “He asked that I remain, on one side, slightly normal. So I only have my tattoos on my left side. I think he sees [my right] as my Marilyn Monroe side, and he sees [my left] as my Iggy Pop side.” It may seem like an odd thing for her father to request, but Gaga explains how it came about: “I sort of naturally was doing it all on the left and then my dad sort of requested one day because I was talking about getting one on my right arm and he’s like ‘could you just keep your crazy on the left?'” 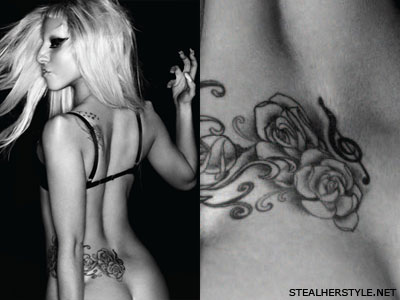 Lady Gaga’s very first tattoo was a treble clef at the center of her lower back.  Obviously music has always been a huge part of Gaga’s life.  She got this tattoo when she was only 17 years old and used a fake ID because she was underage.  She later added a large flower tattoo beside it but instead of covering the music note she kept it intact and had it touched up.

Lady Gaga’s parents have come to accept her tattoos but they weren’t always fans.  She says “when I got my first one, they like had a freakin’ heart attack!”  Gaga of couse continued to get more tattoos.  She says that when she got her next tattoo “I had a heart attack because I felt bad for not telling them I was gonna it. We’re really close. So I went home and I started crying and I was like ‘I really love it, I’m really sorry.'” 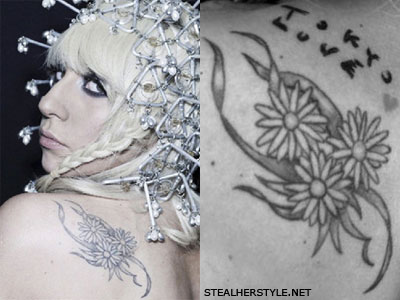 Another of Lady Gaga’s earlier tattoos is this design of three daisies on her left shoulder. 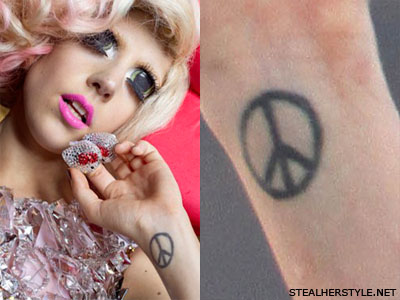 Lady Gaga has a tattoo peace sign on the inside of her left wrist as a tribute to John Lennon, one of her musical idols. Lennon was a major advocate of the anti-Vietnam war movement and a believer in peace. “My peace sign…was inspired by John Lennon. I grew up two blocks from the [Strawberry Fields] Imagine memorial. It’s actually one block away from where John Lennon was assassinated. And I am a huge Beatles, John Lennon, Yoko Ono fan. So ‘give peace a chance’,” Gaga explains, referencing John Lennon’s 1969 hit solo song “Give Peace A Chance.”

The tattoo is pointed inwards towards her in order to serve as a reminder to herself. “You will notice that if you’re looking at it it’s upside down, but for me it’s right side up,” she says. “The reason I had it put kind of upside down is because I wanted it to be a reminder to me that even though I always write fun music about sequins and panties and fame and money, that I make sure to always keep in mind the important things.” 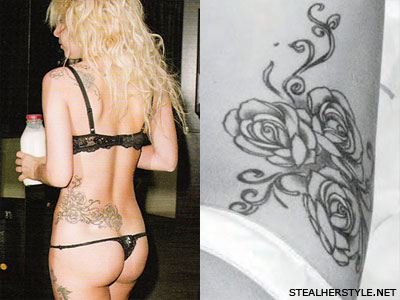 Lady Gaga has a large tattoo of roses that sprawls from her lower back to the left side of her waist.  This tattoo was done by famous tattoo artist Kat Von D back in 2008 and it was filmed for the show LA Ink. Lady Gaga had some regrets about her treble clef tattoo and its’ “tramp stamp” location, so she worked it into her side piece. “Literally this entire side piece I have is a compensation for that one tattoo,” she says.

Gaga is drawn to the feminine feeling of Kat Von D’s designs. She told Kat: “You do beautiful work. It’s really elegant and the lines are perfect.” 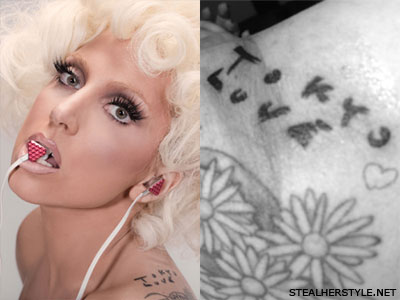 Lady Gaga got two tattoos during her trip to Japan in August 2009, one of which is “Tokyo Love” on her shoulder. Gaga got this tattoo along with a few members of the “Haus of Gaga,” her creative team of stylists and designers.  The tattoo is to commemorate a shining moment in Gaga’s career when the Haus of Gaga worked with the famous Japanese photographer Nobuyoshi Araki on a photoshoot starring Lady Gaga.

Gaga explains: “[The tattoo] was to celebrate the Haus’s collaboration with legendary Japanese photographer Araki. I was bound by Araki’s personal bondage artist, by several ropes and Japanese knots, and through a visceral bondage and sexual-torture experience, Araki photographed me, using a series of several cameras. He did not photograph my image; he photographed my soul. We spent the night with Araki and his friends at a members’ only bar he’s owned for more than 20 years, where he displays his work. Here, he painted me and took Polaroids through the night. I was honored to be the first American woman he’s photographed, and only the second pop artist, in the company of Björk. He signed the Polaroids “Tokyo Love,” and the Haus got tattoos of his marking in celebration.” 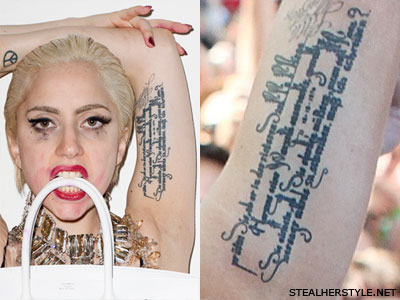 The other tattoo which Lady Gaga got in Japan is actually written in German.  This large text on her bicep is a passage from Gaga’s favorite writer Rainer Maria Rilke, whom she describes as “a poet and romantic philosopher.” The tattoo translates to “Confess to yourself in the deepest hour of the night whether you would have to die if you were forbidden to write. Dig deep into your heart, where the answer spreads its roots in your being, and ask yourself solemnly, Must I write?”

The quote speaks of the need to write and to Gaga it is about her need to write music.  She says: “I had this tattooed on my arm so that every single day I would be reminded that my gift is songwriting and I have to do it. It’s not an option. It’s like breathing.” 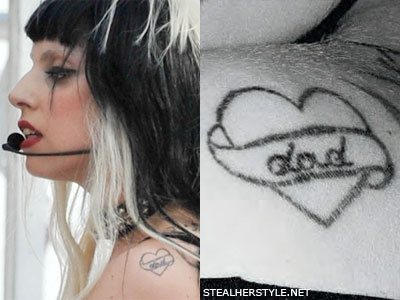 Lady Gaga’s third tattoo on her left shoulder is a tribute to her father.  It is a heart with a banner reading “dad.”  Gaga got this tattoo shortly after her father had a successful open heart surgery.  He has struggled with a heart condition for many years and Gaga was afraid that she was going to lose him.  She wrote her song “Speechless” as a plea for him to get the surgery.

When she told her father about her plans to honor him with a tattoo she says “he got all teary-eyed and he said, ‘Well, you’re running out of real estate, so don’t get it too big.'”  She announced her plans for the tattoo in October 2009 and had it done shortly after. 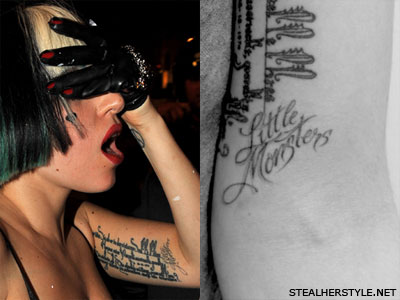 Lady Gaga permanently inked her love for her fans in February 2010 when she tattooed “Little Monsters” on her arm below her German tattoo.  Little Monsters is the name given by Gaga to her fanbase.  She got this tattoo right after the 2010 Grammy Award where she won two awards: best dance recording for “Poker Face” and electronic dance album for The Fame.  Though the Grammys are chosen by industry insiders rather than voted on by fans, Gaga still credits her fans with all of her success.  After winning the awards she tweeted “We won big tonight little monsters. I am so proud to make music 4 you. I hope I continue to inspire u the way u inspire me. You’re everything.”  She took to Twitter again to show off the tattoo with the caption “look what i did last night.  little monsters forever, on the arm that holds my mic. xx” 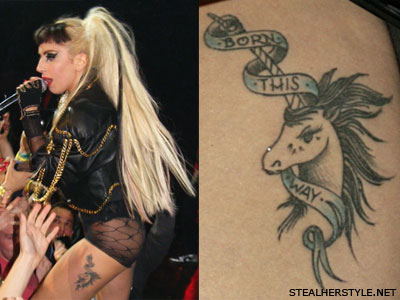 In September 2010, Lady Gaga tattooed a unicorn on her thigh with a banner reading “Born This Way,” the title of both her second full-length album and its lead single.  Her song “Born This Way” is about embracing one’s uniqueness and never compromising, and speaks in particular to the gay community, whom Gaga has been a vocal advocate for.  The unicorn is a symbol of rarity and uniqueness. 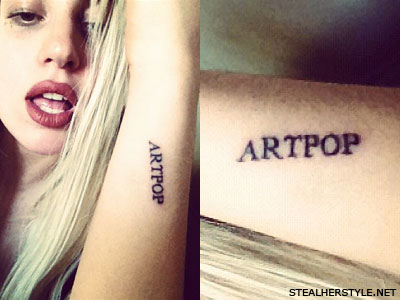 Much like Lady Gaga got a tattoo to celebrate her album “Born This Way,” she added a new tattoo in August 2012 with the title of her album “ARTPOP.” She got the tattoo as soon as the album title was announced, though it was not released until November 6, 2013.

ARTPOP is more than just the name of her album, it’s also an expression of her life and career. “I live between two things–I live between art and pop all the time,” she says. 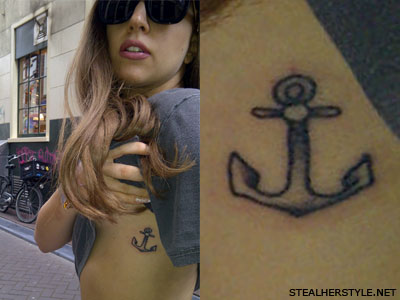 Lady Gaga waited nearly two years between tattoos number 9 and 10, but only a month between 10 and 11! She revealed an anchor on her ribcage, done by Henk Schiffmacher at Amsterdam Tattoo Museum, in September 2012. “New Tat. Stamp of His Mermaid,” she wrote. 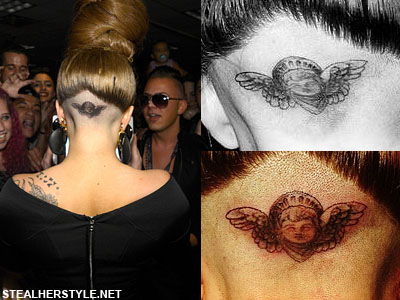 On September 13th, 2012, Lady Gaga got a cherub tattooed on the back of her head live at her fragrance launch. Taking place at the Solomon R Guggenheim Museum, Lady Gaga changed into lingerie and tattoo artist Michael Mahoney inked a renaissance cherub on the back of her head inside of a giant perfume bottle. She prepared for the tattoo by shaving a triangle shape into her hair, but let the hair grow over the tattoo a few months later. 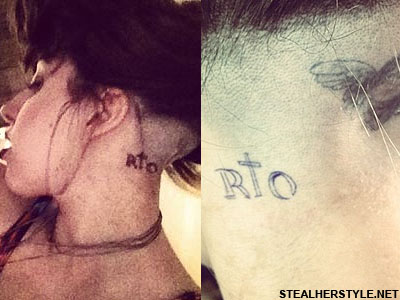 On November 10th, 2012, Lady Gaga headed to a tattoo parlor in Rio de Janeiro to get “R†O” tattooed on the left side of her head, behind her left ear. This tattoo is for her fans, and the font is three different fans’ signatures. Tweeting about her tattoo, she said:

“R†O. Monsters, all over the world you continue to inspire me everyday, your like an endless ocean of possibilities.”

…”the font was derived out of the signatures of three fans, all from different neighborhoods and ages. Represents how music brings us 2gether.“ 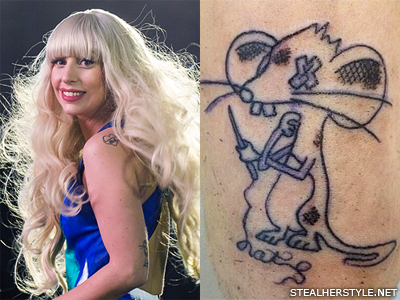 Lady Gaga got a tattoo of a mouse on her elbow in August 2013 in honor of her younger sister Natali Germanotta who is a student at Parsons The New School for Design in New York City. Gaga chose a mouse because Natali was called “mouse” as a child. The details of the tattoo are also relevant to her sister’s life–the mouse is holding a needle and thread to symbolize Natali’s love of fashion design and the thread below the mouse’s feet spells out her nickname “Nat.”

Gaga explained the tattoo on her website: “Got it for Nat, my sister and original hoodrat, her name was always mouse and I am loopy. Needle represents her passion for fashion design. I love her more than anything, she inspired me.”

Lady Gaga has mentioned many ideas for possible future tattoos including “Free Bitch” from her song “Bad Romance,” a Monster paw, “Mother Monster,” and a cross with a heart in the center like the artwork of her single “Judas.” However she will definitely put more thought into any tattoo idea since she says “It’s all about pacing yourself because I’m running out of real estate on my left side.”