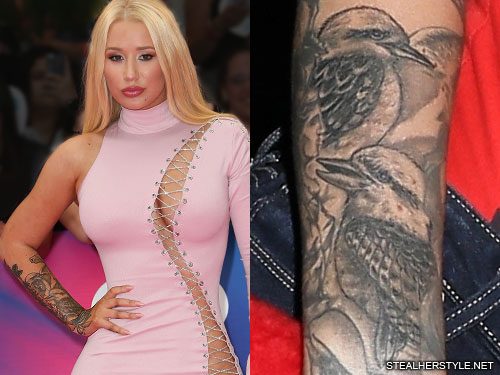 Iggy Azalea made a major addition to her right arm half-sleeve with this pair of birds, which were first seen at the GQ Men of the Year Awards in Sydney on November 16, 2016.  These kookaburra birds and the waratah flower on her hand are both symbols that remind her of home.  Kookaburras  are native to Australia and are the official state flower of New South Wales, where she grew up.

END_OF_DOCUMENT_TOKEN_TO_BE_REPLACED 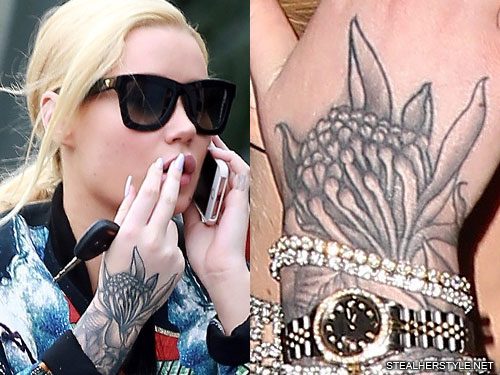 Iggy Azalea added to her half-sleeve in November 2016 with this flower that goes onto the back of her right hand. The flower is a waratah which is the official state flower of New South Wales, where Iggy grew up in the town of Mullumbimby.  She told 103.5 KISS FM:

I’m from New South Wales in Australia, it’s a state, and this is our state flower that I have tattooed on me. A little piece of home.

Although Australia was her first home, Iggy never felt like she belonged there.  She became enamored with America on trip to visit her grandparents when she was 11.  She loved the glamour, the fashion, and how freely people expressed themselves.  She dropped out of high school and moved to America to pursue her music career when she was 16 years old.  She told Paper:

I knew I had to get the fuck out of where I lived. It was suffocating me. I wanted to live in a place where the sky was the limit, a place where my dreams weren’t strange or weird, where others had even crazier ideas than me. I knew all of that was in America, and that’s where I had to go and that’s where I thought people were going to accept my wild thoughts. I tried Sydney and Melbourne and they just weren’t it. Nothing else was.

Although she spends most of her time in Los Angeles, she was back in Australia when she had this tattoo done by artist SAINT at The Art Of Tattoo Studio near Sydney.

END_OF_DOCUMENT_TOKEN_TO_BE_REPLACED 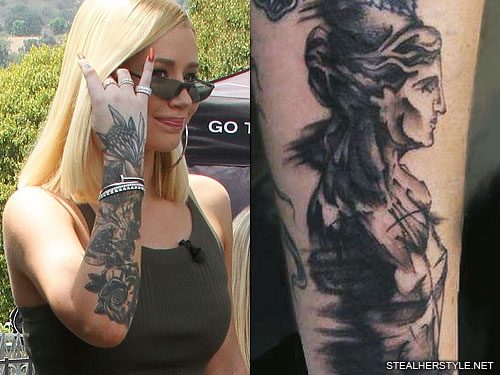 Iggy Azalea’s right arm half-sleeve includes this classical bust statue.  The dark blurry lines on the left side serve the practical purpose of covering up her old “Trust Your Struggle” tattoo but it also symbolizes the concept of Digital Distortion.

This is the second tattoo that she got representing her album Digital Distortion, which would have been her sophomore studio album but never ended up getting released. She also has the album title on her fingers.