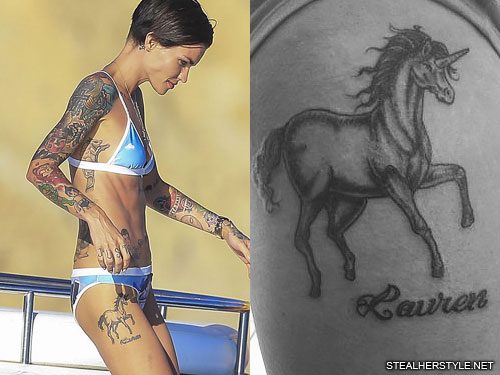 Ruby Rose’s first and thus-far only leg tattoo is a unicorn on her right thigh with the name “Lauren,” presumably for an ex-girlfriend, which she got in March 2012. “I thought I’d never fall in love again.. I said i would never get a leg tattoo..I said I’d never get a girls name tattooed. Never say never.” she tweeted. She then posted a picture of the new ink, writing “Everyone keeps asking about the new tattoo, I get these for me, not for anyone else but here it is.. x”

In May 2015, she posted a photo on her Facebook of this tattoo with bandages over it, explaining that she she had just had her first session of laser tattoo removal. “Ouchhhhhhhh!!!!! Ok so.. I never thought I’d see the day.. But I decided to remove a couple of tattoos ( ones that were not done well ) and well.. Yes it’s actually the most painful thing in the world but thank you #laseraway @laseraway for making it bearable. 10 sessions.. 1 down 9 to go.”

However it doesn’t seem that she followed through with her tattoo removal plans — or at least she hasn’t had time to schedule the remaining sessions — as the tattoo is still clearly visible in photos from her August 2016 beach vacation.

END_OF_DOCUMENT_TOKEN_TO_BE_REPLACED 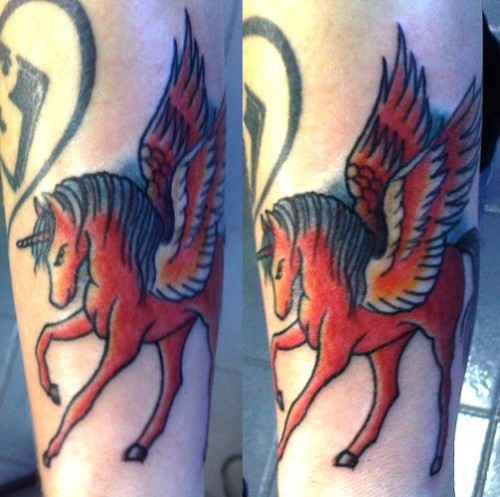 Beth Lucas got added this tattoo of a red unicorn just underneath the cassette tape on her left forearm. It was done by tattooist Ash Against at 198 Tattoo. 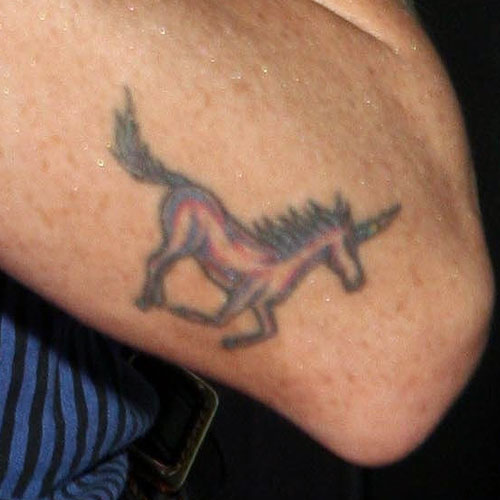 Taryn Manning has a running unicorn tattooed on her left elbow. She loves all things fantasy. “Always riding unicorns! Over the rainbow or over the smog! Life is magical and goofy as heck!!!” she tweeted. She also has a clothing line called Born Uniqorn. 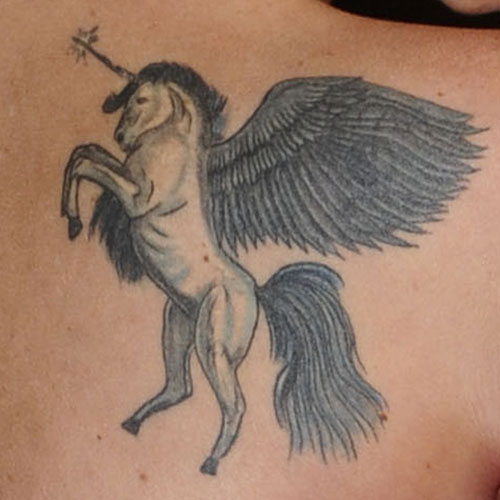 Tulisa Contostavlos has a large winged unicorn on her right shoulder blade. This tattoo covers up an older tattoo of a ying-yang symbol and her name in Greek. The previous tattoo is still faintly visible through the wing of the unicorn.