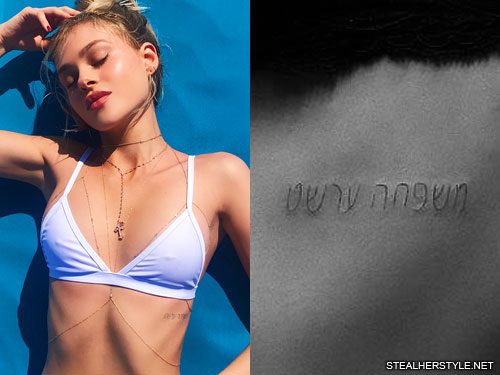 Nicola Peltz and her brother Will have matching Hebrew tattoos on the left side of their ribs. Her tattoo says “משפחה ערשט” which means “family first” in Yiddish while Will has only the first word “משפּחה” meaning “family.” Yiddish is the historical language of Ashkenazi (Eastern European) Jews and it is written in the Hebrew alphabet. They chose Yiddish for their tattoos because they are Jewish and have Ashkenazi heritage on their father’s side of the family.

This was Nicola’s first tattoo, and their July 2016 session with artist Dr Woo was the first time under the needle for Will as well. His tattoo is much thicker and darker than hers and looks more like traditional Hebrew lettering. Her tattoo is styled with thin handwritten letters for a subtle look.