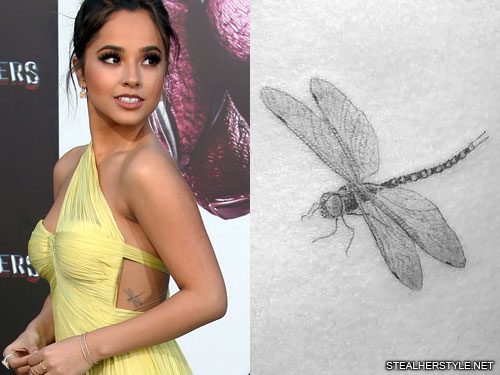 Becky G got a dragonfly tattoo on the left side of her ribs in September 2016. The delicate but intricate inking shows artist Doctor Woo’s signature style. She loves his work but had a hard time scheduling a session with the in-demand artist. “Just waiting for an opening with the tattoo artist I’ve wanted it from forever,” she tweeted.

The dragonfly represents the spirit of her deceased cousin Ceci, who was six years older than Becky and passed away when Becky was only three. She opened up about her cousin on E!’s Hollywood Medium with Tyler Henry, describing how one of the hardest times in her life was when her family lost their house when she was nine. “That’s when I turned to who I consider my guardian angel til this day. I lost her when I was really young. She was around the same age. She was just always with me, still after she passed away. She was with me, I could see her and I could feel her.” She had a framed photograph of cousin Ceci on her nightstand in that house and it’s one of the only things that she kept from that bedroom.

“If you look at the frame it has dragonflies on it, and I’ve always connected her to dragonflies. Just the other day I was on stage and I was about to perform in front of like 50,000 people and there was a dragonfly circling around me. I got very overwhelmed with emotions because I was very — I was at my limit, I was exhausted, I didn’t want to continue. And the dragonfly kind of just changed everything.”