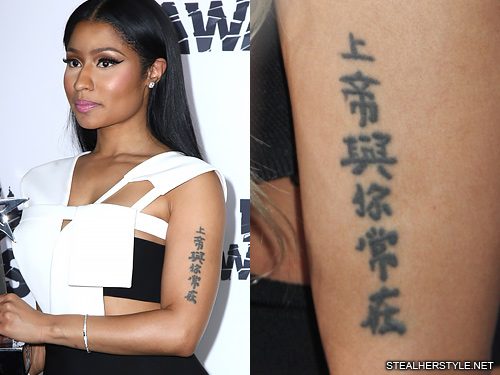 Nicki Minaj has a tattoo of Chinese writing on her left upper arm. The six Chinese characters “上帝與你常在,” pronounced  “shàngdì yŭ nĭ cháng zài,” translate to “God Is With Me Always.”

She got it when she was 16 and it was originally supposed to be placed on the back of her neck, but she moved it to her arm instead. In an interview for Billboard, Nicki said that she regrets the tattoo, or rather the placing of it:

“I wish I never got the tattoo, because it’s on my arm. So when I wanna wear a beautiful evening gown and go out with the queen, she doesn’t like my tattoo too much.”

She put it on her arm because she didn’t want to deal with the pain of a neck tattoo, saying:

“I was going to get it on the back of my neck, and I told the guy: ‘Could you empty the ink out? I just wanna see how the needle feels, like if it’s gonna hurt real bad?’ So when he put that needle on that bone, I was like ‘Never…Just do it on my arm…I already paid for the tattoo just do it on my arm.'”

She also talked about her mother’s reaction and her feelings that she was too young for the tattoo:

“I was thinking how I was gonna explain it to my mother. My mother had told me, at that time I had a tongue ring, and she had told me ‘I’m disowning you.’ When she saw the tattoo and the tongue ring, she was like ‘I am disowning you.’ She was like, ‘You need to not have that’ and she was dead serious, and I was like bummed out that I went and got the tattoo. I eventually took the tongue ring out, but I think I was I don’t know, maybe 16? Way too young. You have no idea what you want to put on your body at the age of 16, or 15, or 13. You need to wait until at least 21 and decide and have your brain start to develop.”

When the interviewer asked if she would do it again, she said:

This was her only tattoo for the majority of her career, up until she got a second in 2018. 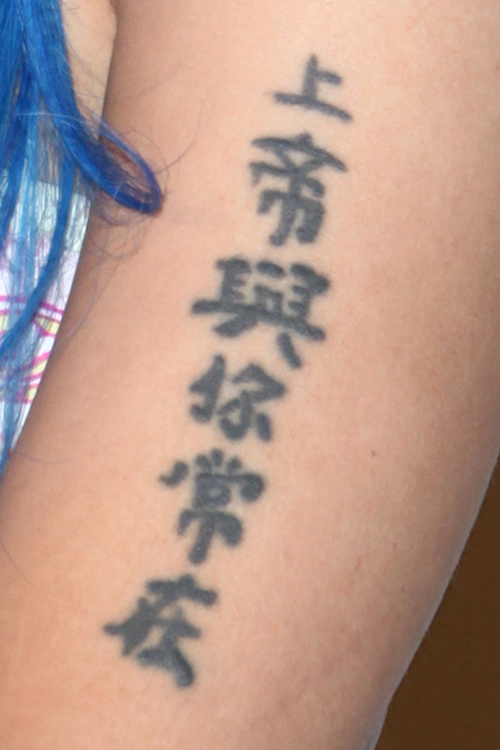 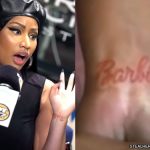