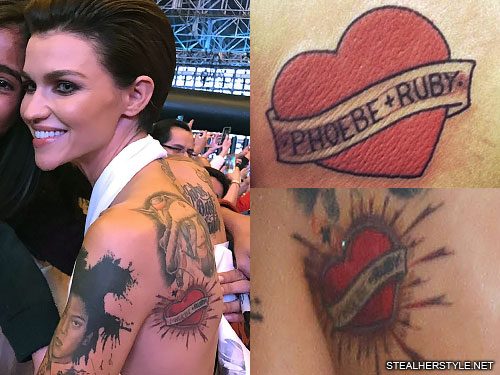 Ruby Rose commemorated her relationship with partner Phoebe Dahl by getting this tattoo of a heart on her back with their names in it. She showed off the new tattoo in an April 1, 2014 instagram photo which she captioned “Whoops spelt romeo and juliet wrong oh well ;)” The couple announced their engagement a few weeks earlier after three months of dating.

Unfortunately they never made it down the aisle and broke up in December 2015. “[Phoebe] remains very dear to my heart. I will forever treasure our time together. I’m a better person because of the time we shared,” Ruby wrote on Twitter.

Ruby has yet to remove Phoebe’s name from the tattoo, though she has already altered it once — adding paint strokes all around the outside of the heart.

END_OF_DOCUMENT_TOKEN_TO_BE_REPLACED 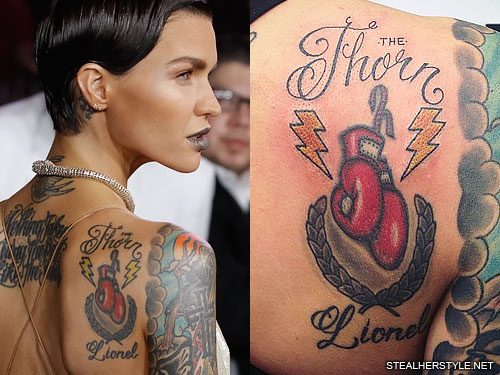 Ruby Rose has two boxing-related tattoos on the right side of her upper back.  The first part of the tattoo is a tribute to her godfather Lionel Rose, an accomplished professional boxer who was the first indigenous Australian to win a world boxing title. Lionel passed away in May 2011 at the age of 62.  That same month, Ruby visited Sydney Australia tattoo artist Rhys Gordon to get a tribute piece. She got a tattoo on her right shoulder blade of a pair of boxing gloves and a laurel wreath with Lionel’s name at the bottom.

Ruby, whose birth name is Ruby Rose Lagenheim, was named after Lionel Rose but is not biologically related to him. He and her father were close friends. Back in 2012 Lionel’s family stirred up controversy by saying that they hadn’t had any relationship with Ruby since her parents’ divorce and alleging that she was using the name “Rose” to further her own career by association to Lionel. Though it’s true that Ruby didn’t have any contact with Lionel later in her life, she says that seeing him as a young girl had a major impact on her.

“I met Lionel five or six times as a young tacker and he was a huge inspiration to me,” she told the Herald Sun. “I didn’t have a dad. Those trips to Lionel’s, while very few and far between, were everything. We had a crummy life, we didn’t have any money, dad was like `how’s it going?, but Lionel had a real impact on me…He passed away as my godfather. They can’t take that away from me…I love him – and if he’s looking down on me from heaven, I know he would be proud of the things I do.”

One of the thing that Ruby did honor Lionel’s legacy was to train as an amateur boxer herself. In November 2012 she added onto the tattoo with two yellow lightning bolts and “The Thorn” which is her own boxing nickname. She entered a few amateur fights around the time that she got the tattoo, but it seems that since then she’s put her own boxing gloves to rest.

END_OF_DOCUMENT_TOKEN_TO_BE_REPLACED 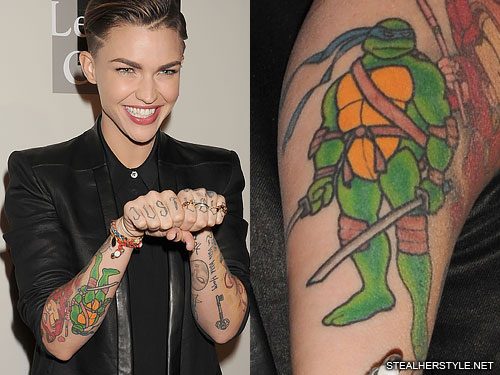 The first of the three characters tattoos on Ruby Rose’s right forearm was Leonardo from the Teenage Mutant Ninja Turtles, which she got from artist Rhys Gordon in November 2011.

She posted a picture on Twitter of herself as a little girl dressed up in Ninja Turtles costume. “This is why I have Leonardo the ninja turtle tattooed on me. I wore this to school.. I thought I was him,” she wrote.