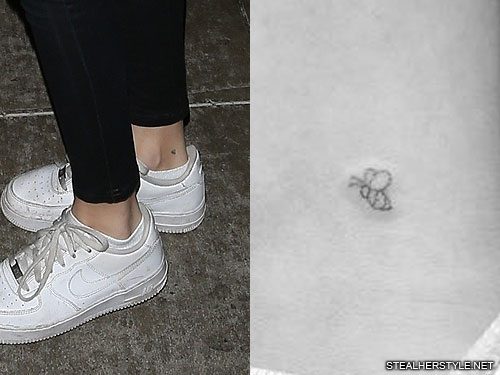 Madison Beer has a teeny-tiny bee tattoo on the inside of her right ankle.  It’s somewhat of matching tattoo, but not exactly.

Her boyfriend Zack Bia has a much larger and more intricate bee tattoo on the back of his arm which he got from artist bodiesneedrest in November 2017.  His tattoo also includes a letter “B,” presumably for his last name Bia.

Madison got her pared-down version of the bee from the same artist a month later.  They went together to The Honorable Society Tattoo Parlour in Los Angeles on December 6, 2017 and Zack sat by her side while Madison got her own tiny bee to match his existing ink.

In a May 2018 tweet, she confirmed that these are her only two tattoos, but she may get more in the future.

I have two! a lip tattoo that says Honey I got about 2 years ago and a little bee on my ankle I got like 6 months ago. I might get more but very small ones.