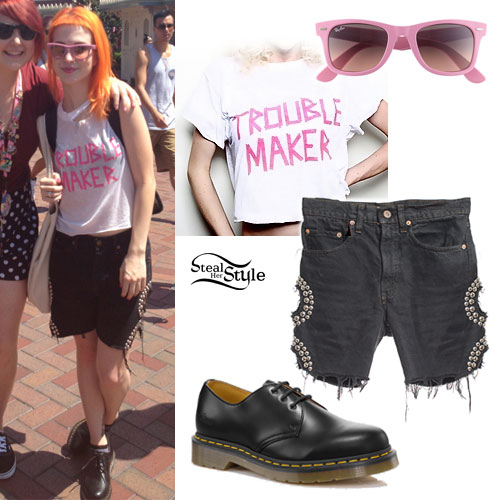 Hayley Williams with a fan at Disneyland on August 30, 2012 – photo: kittenen

Hayley Williams was spotted by some fans at Disneyland wearing a casual tomboyish outfit. This is the first time we’ve seen her wear the Obesity and Speed Denim Studded Shorts with Cutout Circles ($88.90), but unfortunately they are sold out. Her black Dr Martens 1461 Shoes ($100.00) are a relatively new addition to her wardrobe which were debuted in Pomona earlier this month. On the other hand, she’s had these Ray-Ban Classic Wayfarer Sunglasses ($155.00) since 2010. You can of course buy knockoffs for only a few dollars. Hayley wore the Coco de Coeur Trouble Maker T-Shirt ($45.00, sold out) in the January 2012 issue of Alternative Press, but it’s seems like since then she’s chopped it up into a sleeveless crop top. 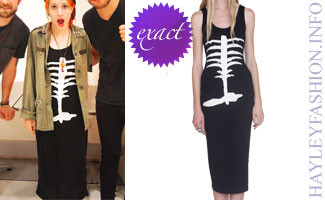 Hayley wore the Skeletons in the Closet Maxi Dress from DimePiece Designs ($48.00) at a meet and greet in August. She is wearing it under a one of a kind studded Wasted Youth WW2 Girls Vintage Jacket from Coco de Coeur ($85.00, sold out). 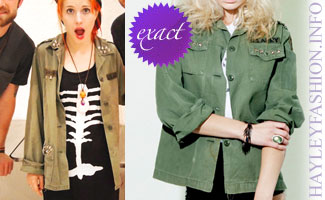 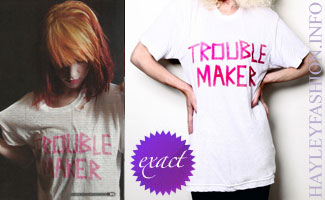 Hayley Williams wears the oversized Trouble Maker T-Shirt ($35.00) from Audrey Kitching‘s Coco de Couer line in the January 2012 issue of Alternative Press. Paramore appear on the cover as the most anticipated music of 2012. The band got a 10-page spread with an interview and new photoshoot. You can see the scans here. 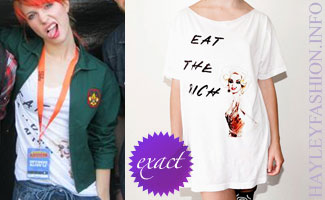 Backstage at one of Paramore’s recent festival appearances, Hayley Williams wore another t-shirt from Coco de Coeur. It’s the “Eat The Rich” tee ($35.00) which has an illustration of Marilyn Monroe. A while back Hayley posted a picture of a whole pile of t-shirts that Coco de Coeur sent her, so I imagine we’ll be seeing more soon. [photo via tumblr] 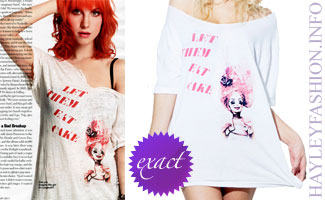 In her Cosmo feature, Hayley Williams wears the Let Them Eat Cake Tee ($35.00) from Coco de Coeur, the same brand behind the Punk Rock Ruined Me tee which she wore at the Grammy Nominations event in December. 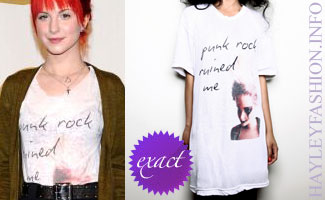 At tonight’s Grammy Nominations Concert, where Hayley Williams announced the nominees for Best New Artist, Hayley wore this tacky and overpriced t-shirt from scene queen Audrey Kitching’s line Coco de Coeur. Mostly I’m just not a fan of Audrey Kitching, but the doll head is awkwardly floating in the middle of the t-shirt even though there are obvious lines where the image was cropped…not good design. Luckly Hayley tucked in the tee so you can’t see that part, and the waist-cinching belt hides the shapelessness of the shirt. You can buy the “Punk Rock Ruined Me” t-shirt for $35 at cocodecoeur.com.

And now for some awesome news: Paramore and Hayley Williams both received nominations for the 2011 Grammy Awards! Paramore’s “The Only Exception” was nominated for Best Pop Performance by a Duo or Group and B.o.B, Hayley and Eminem received a nominated for â€Ž”Airplanes, Part II” as Best Pop Collaboration with Vocals.