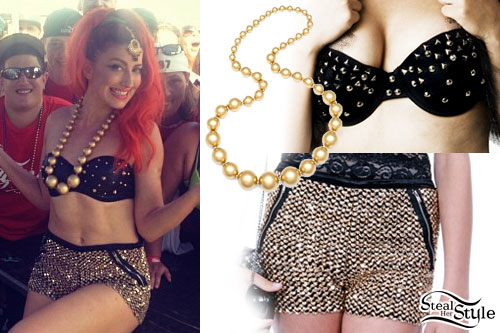 When I first saw Neon refer to herself a “gypsy red head,” I thought it was just a joke about her kooky style, but it turns out that she’s actually a gypsy. She spent most of her childhood traveling in a bus and was trained as a trapeze artist. Even more bizarre is that “Neon Hitch” is her real name. Her unconventional upbringing has definitely shaped her personal style — she claims her mother as her biggest fashion influence. Her style involves lots of gold, feathers, and crazy headdresses.

For this outfit, she wore Gold & Black Sequin Detail Zipper Hot Shorts ($29.99) with a studded strapless bra and clunky gold beaded necklace. You can get a similar bra on Etsy for $25.00 and necklace on Amazon for $17.95.

So far Neon’s biggest musical accomplishments have been her works with others — she sings on Gym Class Heroes’ “Ass Back Home” and co-wrote Ke$ha‘s “Blah Blah Blah” — but that’s poised to change with the release of her debut album Beg, Borrow and Steal this summer.

She has five tattoos, including “Gypsy” on her wrist and her sister’s name on her arm. 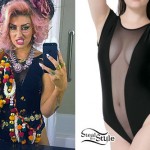 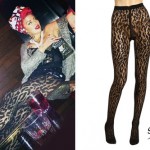 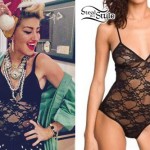 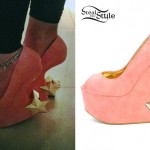 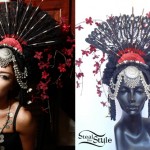