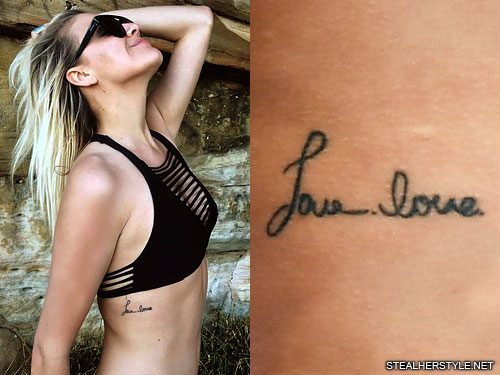 Kelsea Ballerini has a tattoo on her ribcage which says “Love. love.”  The word “love” appears twice because it’s in the handwriting of each of her parents.

The tattoo also celebrates a major milestone in her career, her debut single “Love Me Like You Mean It” hitting number one on the Billboard Country Airplay chart.  She was the first female solo artist since Carrie Underwood to have her debut single top that chart and the first ever to achieve that feat while on an independent label.  She told Ty Kelly and Chuck:

The week that ‘Love Me Like You Mean It’ went No. 1, I received letters from my mom and dad. I was in New Orleans, and I took the letters and got ‘love’ tattooed in my mom and dad’s handwriting.

Congrats to @KelseaBallerini who has been chosen as the recipient of the Gene Weed Milestone Award for outstanding achievement! @ACMawards pic.twitter.com/1iRO8KbvFJ 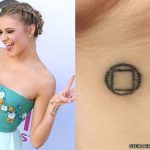 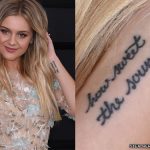