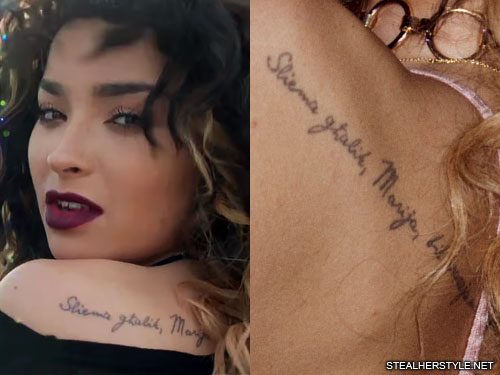 Ella Eyre has a writing tattoo on the left side of her upper back. The words “Sliem għalik, Marija, Bil-grazzja mimlija” come from the Maltese language version of the Catholic rosary prayer, meaning “Hail Mary, Full of Grace.”

She doesn’t speak any Maltese herself, but chose language because she is ethnically Maltese on her mother’s side (her father is Jamaican). She first visited Malta when she three years old and says it’s “one of my favourite places in the world.” Hundreds of her second cousins still live there and she’s gone there for occasions such as a family wedding.

The British singer-songwriter had her first performance in Malta at the Isle of MTV festival in June 2018. She told TVM that the language is so sentimental to her that just hearing a taxi driver talk reminded her of her Maltese-speaking grandmother.

This is Ella Eyre’s only tattoo. She has said that she is “done with tattoos” and doesn’t want any others because of how much she loves this one. “One is enough, means too much to overshadow with another,” she tweeted.