Angelina Jolie has had at least 16 known tattoos: 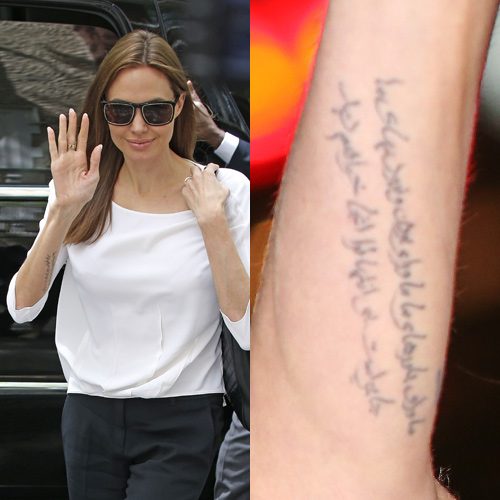 Angelina Jolie has a two lines script tattoo written on her right forearm. 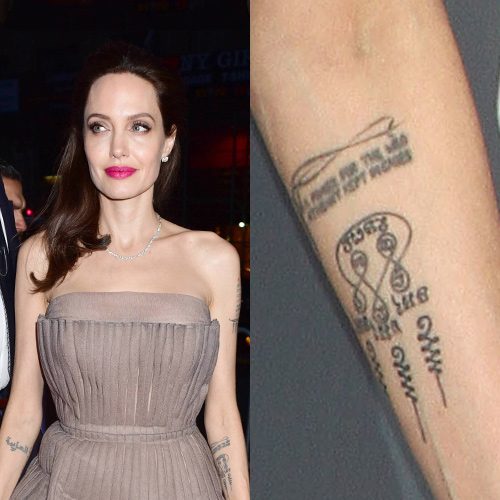 Angelina Jolie has a Buddhist swirls tattoo on her left forearm, a symbol that Buddhists believe it brings good luck and protection from evil. 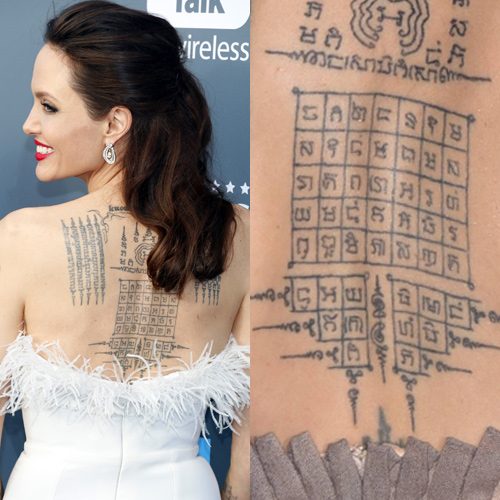 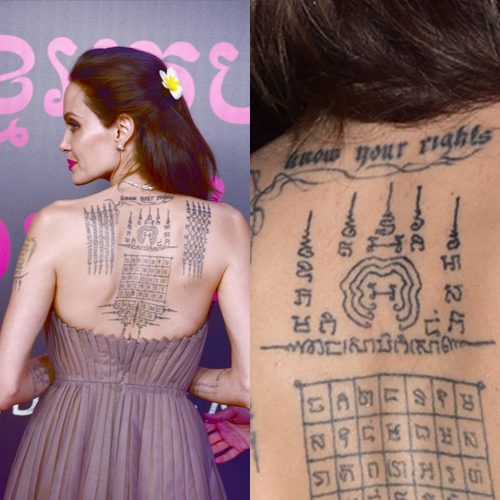 Angelina Jolie got tattooed by a Thai ex-monk Ajarn Noo Kanpai in Cambodia, where she was filming in 2016. On her upper back she get the Yant Phutson or Yant of the five Gods symbol. This is a very popular and well know talisman for Thai people from the past to the present. It is the highest talisman (A Master Talisman) and multi-purpose. The Sak Yant represents having and acting with great mercy towards yourself and others; Amassing great fortune in both the physical and spiritual realms. Wearing this charm provides good luck and promotion in life.

As well as the other inks done by the ex-monk, this sak yant was applied using steel rods mounted with a surgical steel needle – a much more painful procedure. 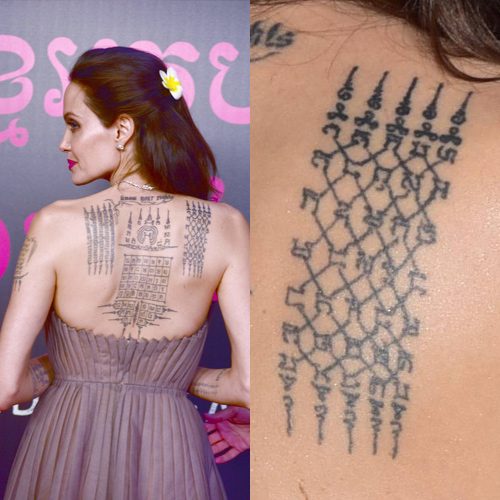 Angelina Jolie recently added an ancient Buddhist Yant tattoo down her right shoulder blade.
The mystical ink was done by a former Thai monk Ajarn Noo Kanpai who flown from Bangkok to Siem Reap in Cambodia, where Angelina was filming. It was applied using steel rods mounted with a surgical steel needle – more accurate than a tattoo gun, but also much more painful.

Her tattoo, Yant Kraw Petch (Diamond Armour), highlights the powerful of virtues of Buddha. It helps you regarding luck, virtue, wealth, success in business. Anyone who receives this Yant is protected from bad times and failure in life. 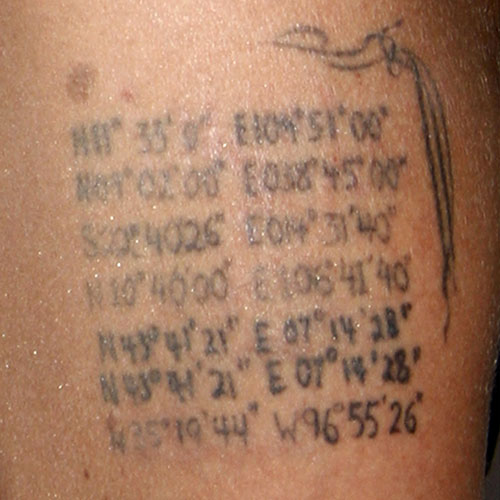 Angelina Jolie has the birthplace coordinates of all seven children inked on her left arm. As she’s added new lines to the list, she also added a swirl on the top right corner. 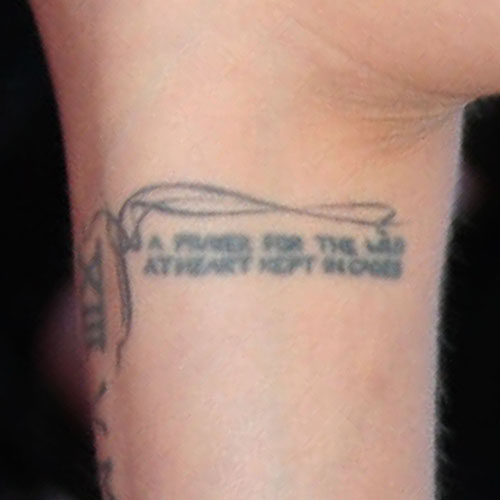 Inside Angelina Jolie’s left elbow are the words “A prayer for the wild at heart kept in cages,” the subtitle of Tenessee Williams’ 1941 play Stairs to the Roof. 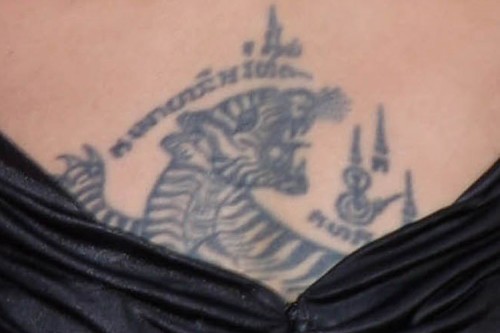 Angelina Jolie has a large tiger design on her lower back which she got on a trip to Thailand in 2004. 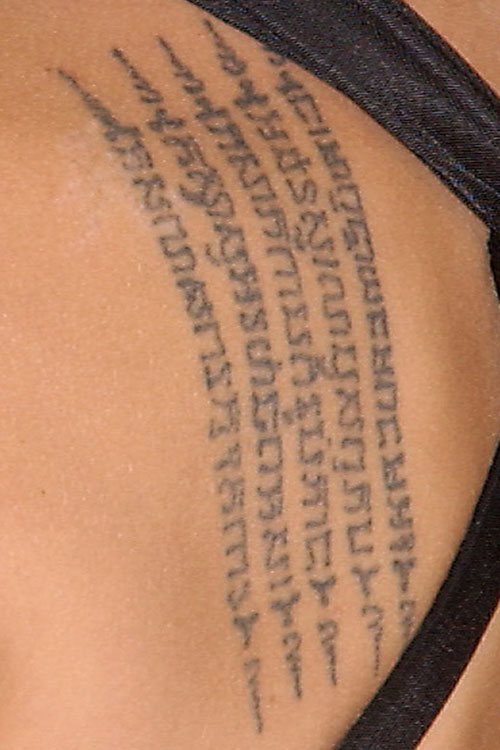 The tattoo on Angelina Jolie’ left shoulder blade honors her first son Maddox Chivan Jolie-Pitt who was born in 2001 and adopted by Angelina in 2002. Maddox was born in Cambodia and the tattoo is written in Khmer, Cambodia’s official language. It is a prayer that reads “May your enemies run far away from you/If you acquire riches may they remain yours always/Your beauty will be that of Apsara/Wherever you may go, may will attend, serve and protect you, surrounding you on all sides.” 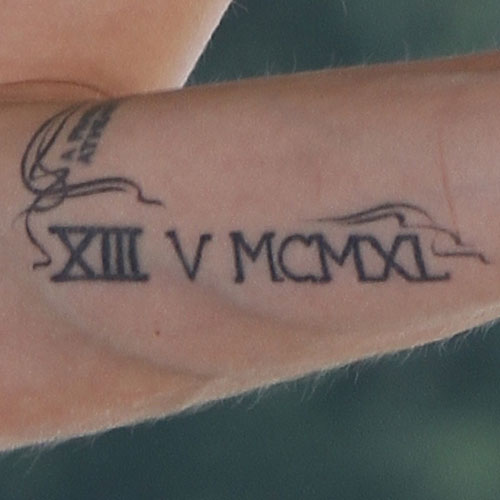 On the side of her left forearm, Angelina Jolie has a tattoo of the Roman Numeral “XIII V MCMXL,” which represents the numbers 13/5/1940. It is a tribute to Winston Churchill, for the “blood, toil, tears and sweat” speech which he gave on May 13, 1940.

She also has some swirling lines to connect it to a neighboring tattoo on her elbow.