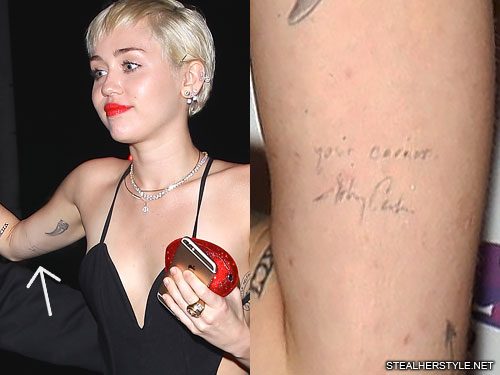 Miley Cyrus revealed a new tattoo on the red carpet at the MTV Video Music Awards in August 2014. It’s done in a watered-down gray ink which makes it hard to see relative to her other inkings. The new writing on her right bicep says “I’m in your corner” on one line with country music legend Johnny Cash‘s signature on another line below it.

The quote doesn’t come from any public statement of Cash’s, but rather from a private letter that he wrote to Billy Ray Cyrus in 1992, following the success of Cyrus’ breakout song “Achy Breaky Heart.” Though the song received a lot of criticism for being a throw-away hit, Cash extended his support and welcomed Billy Ray into the country music community. In the hand-written letter, Cash wrote:

“Thirty-six years ago, I was working with Elvis and saw him take the same kind of flak you’re taking now. Congratulations on the way you’re handling it all. In your case, as in Elvis’, the good outweighs the bad. Let ’em have it. I’m in your corner.”

Billy Ray Cyrus has the letter framed and on display in his home, where Miley surely saw it and took the message to heart. Though Miley has yet to speak about the tattoo, Billy Ray talks about the what the letter meant to him in a video clip:

“Johnny Cash wrote me the letter I carry around in the [“Thin Line” music] video. He wrote it to me in June of 1992. In some ways he wrote it at a time that I was going through the storm of my life. To receive that letter from Johnny Cash, and he ends it with ‘Let ’em have it, I’m in your corner.’ Knowing that Johnny Cash was in my corner, quite frankly, that was my rock. It not only was the cornerstone of that time period in my life but in some ways it became the cornerstone of the rock I stand on now.”