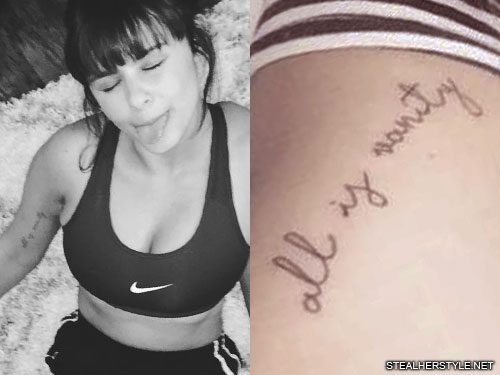 Jacquie Lee got this tattoo which says “all is vanity” on her right bicep in memory of Christina Grimmie, who had a tattoo of these same words on her forearm.  Both singers were contestants on The Voice — Jacquie finished third in Season 5 while Christina placed third in Season 6 — and they became friends while performing together on The Voice 2014 Tour. In a video, Jacqui says:

Honestly there are too many memories to count, and I miss them all.  I love her.  She was just an incredible person.

Christina was tragically murdered while signing autographs at a concert in Orlando on June 10, 2016 and Jacquie got her tattoo shortly after. It was first seen in an instagram photo on July 7th. Jacquie isn’t the only person to commemorate Christina’s life with this tattoo. On August 13th, members of Christina’s entourage including her brother Mark Grimmie, producer Stephen Rezza, stylist Audrey Brianne, hair and makeup artist Emily Christison, and publicist Heather Bes all went together to get “all is vanity” tattooed on their forearms. The phrase comes from the bible verse Ecclesiastes 1:2.

photos of Jacquie Lee’s “all is vanity” tattoo:

Bae caught me slipping on a Tuesday @carolinepennell

Jacquie and Christina performing together:

My little nugget and I ?❤️ @jacquieleemusic pic.twitter.com/s2Emhe4Rij

My first tattoo in honor of my favorite book of the bible, Ecclesiastes…

other friends who have gotten the tattoo: 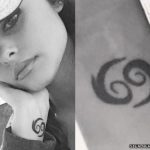