Imelda May @ Sale Waterside Arts Centre on December 17, 2009 by byrdseyeview2011

Imelda May is wearing the two piece “Cruel Mistress” outfit by Steady Clothing. The red halter top ($44.00) has decorative buttons and striped trim that matches the skirt, while the high-waisted striped pencil skirt ($55.00) has a thick waist-cinching belt with snap closures that mimic the buttons on the top. For a Halloween concert, Imelda may traded her usual winger eyeliner for Frankenstein makeup. She wore the green leopard Leo Cardigan by Collectif, which is available for £30.00 in their official store; and the “I Heart Monsters” girls t-shirt by Kreepsville, which sells for $22.00 at Hot Topic 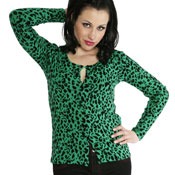 Imelda May owns Collectif’s Heidi Braces Skirt in Check Print in both green and red. The skirts are sold out on Collectif’s site (though you can still but them in other patterns), but they are available in Austrailian boutique The PinUp Gal for AUD $40.

If you look very closely at the pictures, you might notice that these skirts have buckles in the front instead of buttons and a straight waistline rather than a peaked one, but it turns out that Imelda is wearing hers backwards. Imelda May on the red carpet at the 2009 Meteor Awards, photo by Niall O'Farrell

Dublin rockabilly singer Imelda May wore the Green Leopard Print Wiggle Dress by Collectif Clothing ($75.99) at the 2009 Meteor Ireland Music Awards, where she both performed and won the award for Best Irish Female act.