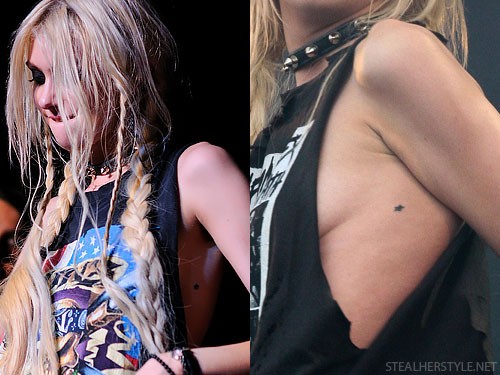 Despite her bad-girl persona and ear full of piercings, Taylor Momsen has only one tattoo – a tiny black star on her left side which she has had since she was 16 years old. She dismisses the tattoo as something that she did when she was “really drunk and really young” and has said that she has no plans for more ink. “I’m not much of a tattoo person,” she told Zimbio. In an interview with Q103 she said that the she does not regret the tattoo because “it’s so small, you can’t really count it…it’s just like a mole.”

Perhaps Taylor’s ambivalence towards the tattoo is because this particular design has never had much meaning to her. “I don’t know why I got a star,” she revealed in an interview with Nylon back in 2009. “I can’t say I’m wearing stars on clothing. I don’t like stars anywhere else. I think they’re really contrived. But for some reason I got a black star.”

Taylor Momsen came into the spotlight as Jenny Humphrey on the television show Gossip Girl and has transitioned into a full-time rock singer with her band The Pretty Reckless. Leading up to the release of their 2010 debut album Light Me Up, Taylor was spotted on multiple occasions with four x’s drawn on the inside of her left wrist. Many fans believed this to be a new tattoo, but it was only temporary. The ‘XXXX’ design is a logo for The Pretty Reckless.